CHICAGO - Passengers aboard a CTA train stopped for more than an hour at Division Tuesday morning described a sweltering, chaotic scene as power was shut off and workers didn’t answer call buttons inside the cars.

"It was super hot, we were sweaty. People were taking off their masks because it was so hot," said Isaac Hart, a student at the School of the Art Institute of Chicago. "The person standing next to me was pregnant … and eventually had to go ask for someone’s seat."

Finally, several riders left through an emergency door and walked along a concrete step on the side of the subway tunnel to reach a station. By that time, firefighters had arrived to the station. They eventually boarded the stopped trains to check on the passengers. 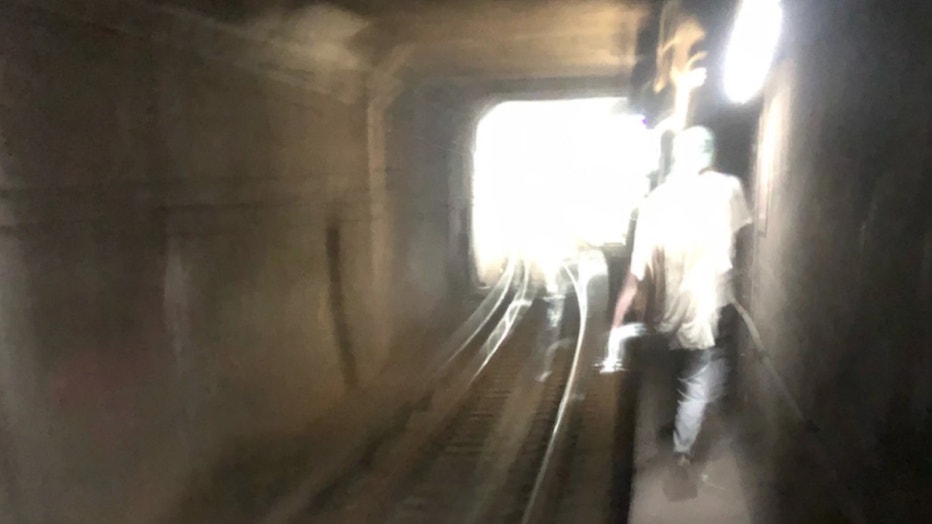 Blue Line riders abandon their train Tuesday morning after it was stuck for several minutes without power near Division Street. | Provided by Isaac Hart

Officials said no one was transported to hospitals and the trains began to move again shortly after 10 a.m., about an hour after they were stopped as police responded to reports of a person on the tracks.

The call came in around 9 a.m. and power was immediately shut down as officers checked the tracks, according to police. Passengers complained they were initially stuck in the dark and left without air conditioning, without anyone explaining what was happening.

Passengers sought relief from the heat by opening the doors between cars, Hart said.

"We were waiting there, and after 20 minutes someone pressed the button to talk to the operator but we didn’t get a response," Hart said. Some riders called the CTA’s customer service line and were told they were just learning of the incident.

"They said, ‘I’ll get back to you,’" Hart said. Rumors circulated about the need to evacuate "but there was no announcement made," he said.

"The CTA didn’t say anything," Hart said. "We told the CTA the car number, where we were. Most of the people in customer service didn’t know there was a problem yet. They couldn’t tell us anything."

The CTA didn’t immediately reply to a request for comment.