Mayor Lori Lightfoot’s plan to roll back the witching hour and age of Chicago’s seldom-enforced weekend curfew cleared a key legislative hurdle on Friday despite an avalanche of opposition.

CHICAGO - Mayor Lori Lightfoot’s plan to roll back the witching hour and age of Chicago’s seldom-enforced weekend curfew — from 11 p.m. to 10 p.m. for minors under 18 instead of 17 — cleared a key legislative hurdle on Friday despite an avalanche of opposition.

The Committee on Public Safety approved the mayor’s ordinance by a comfortable vote of 14 to 3 that did not reflect the barrage of concerns about a crackdown roundly condemned as a toothless and desperate headline-grabber that will have no impact on an outbreak of youth violence downtown and in Chicago neighborhoods — and might even make it worse.

"When you talk about having a tool in the tool box — we don’t use this tool … do we? Having a tool and using a tool are two different things," Lopez said.

Craig Futterman, clinical professor of law at University of Chicago Law School, weighs in on the legality of Mayor Lori Lightfoot's new curfew for unaccompanied minors at Millennium Park.

"There are laws on the books that we don’t enforce. There have been attempts to amend the laws on the books to hold parents accountable," he said. "Yet here we are, because of a singular incident in Millennium Park, rushing now to do this … so this administration can act and feel as though they’ve done something."

Indicted Ald. Edward Burke (14th) said he "can’t remember the last time" he heard of anybody being cited for a curfew violation in the Chicago Lawn or Deering police districts.

Lopez said Lightfoot and her handpicked police superintendent, David Brown, have had "months and months to talk about sustainable solutions to change the culture and dynamic of … these flash mobs and other large groups descending on neighborhoods, not just downtown." 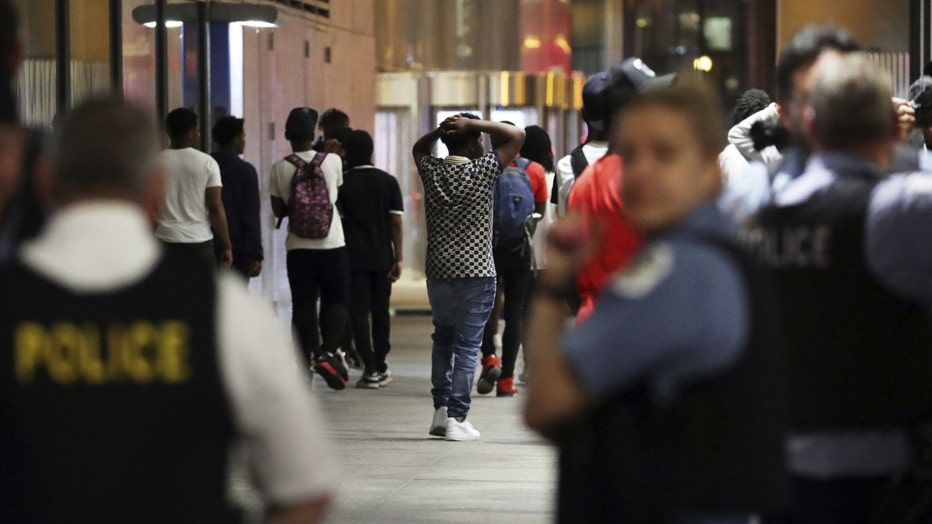 Chicago police monitor the movements of groups of young people in downtown Chicago after a teenage boy was shot and fatally wounded near The Bean sculpture in Millennium Park and the area erupted in disturbances on May 14, 2022. (Terrence Antonio James/Chicago Tribune/Tribune News Service via Getty Images)

None have been forthcoming. Instead, Brown has "jumped from strategy to strategy" depending on the latest headline, the alderperson said.

"This is not a sustainable solution … It’s reactionary, yet again…We need to talk about what’s really driving youth to feel that they can do this. Where are the parents? Where’s the community responsibility?" Lopez said.

"Districts like mine [and] districts on the West Side that need their officers like the 15th District are going to see their resources pulled so we can have the curfew patrol downtown," he said. "And when we already have 30 minutes for a 911 call to be answered at best, three hours at most in some neighborhoods, we’re gonna see the shift continue."

Chicago's Millennium Park is normally a popular attraction for families and tourists, but on Saturday night, a teenage boy was shot and killed there. Nate Rodgers reports.

Ald. Mike Rodriguez (22nd) agreed. "We may have negative consequences out of this. We’re not ready with empirical evidence … We’re basing crime strategy on hunches."

Ald. Ariel Reboyras (30th), former longtime chairman of the Committee on Public Safety, said he’s willing to roll the dice on Lightfoot’s ordinance in a desperate attempt to stop an outbreak of youth violence in the downtown area that culminated in the fatal shooting of a 16-year-old boy last weekend near the Bean in Millennium Park.

But, he said, "We have kids that are carjacking vehicles today and there’s no consequences. I just hope this works. I’m just concerned about police officers, with the violence they have to take care of. Where do we draw the line? What’s the most important thing to take care of."

ACLU comes out against Lightfoot's weekend curfew in Chicago

After a teen was killed in Millennium Park, Chicago Mayor Lori Lightfoot set an earlier curfew for young people downtown. Alexandra Block from ACLU of Illinois joined FOX 32 to explain why the group is against this move.

Former rapper-turned-alderperson Andre Vasquez (40th) recalled having been "kicked out" of Grant Park and Navy Pier every weekend "because I was a person of color out there literally just playing music with friends."

"You couldn’t even hang out there to sell a mixtape. Only because we were people of color. And I would watch other white kids completely get passed over. They wouldn’t even talk to them," Vasquez said.

Warning that the mayoral exception for youth attending "ticketed or sponsored events" with a wristband or ticket stub to prove it would lead to similar "racial profiling," Vasquez said. "This is a poorly-thought, reactive press piece masquerading as legislation."