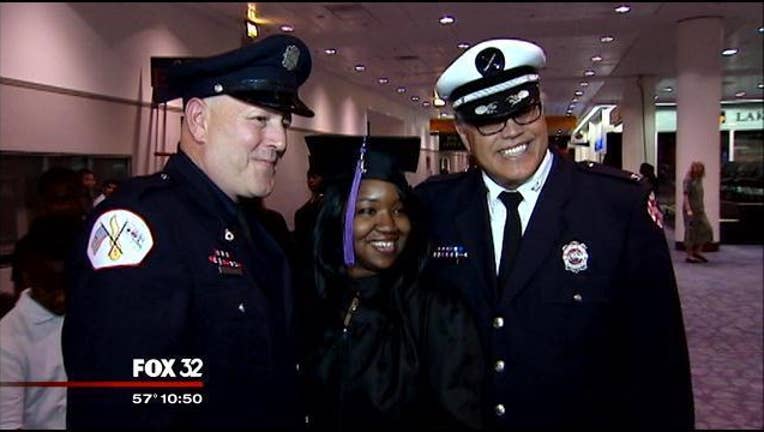 A touching reunion would not have been possible without two Chicago firefighters.

The firefighters attended the graduation of a young woman they saved as a teenager. The trio met Friday for the first time in ten years.

On July 27, 2005, a fire that police say began with Molotov cocktails broke out inside an Englewood home.

"We ended up climbing the ladder, and as he handed Jasmine out to me, I had one hand on the beam, and I had her in my other arm," said Commander Richard Rosado.

Now, that little girl is a college graduate.

Jasmine Doss was able to walk across the graduation stage all because of those brave Chicago firefighters.

"I'm so grateful for these two, because if it wasn't for them, I would not be here today," she said.

For years, Doss said she searched for the men, and that her only memory of their heroics came after the fire.

"I just remember waking up and seeing him at the hospital with a teddy bear that I still have now," she said.

Rosado and Patton attended Doss' 8th grade graduation and played a big role in her associate degree, which is in criminal justice.

"That's what I'm majoring in because I don't want anyone to end up like I ended up, in a coma for two weeks, in and out of the hospital for a year, first second and third degree burns, but I'm still here," Doss said.

"I will never forget them, never," Doss added.

Doss graduated from Northwestern College and plans to become a police officer.

And hopefully with that great spirit of hers, she'll stay in Chicago.