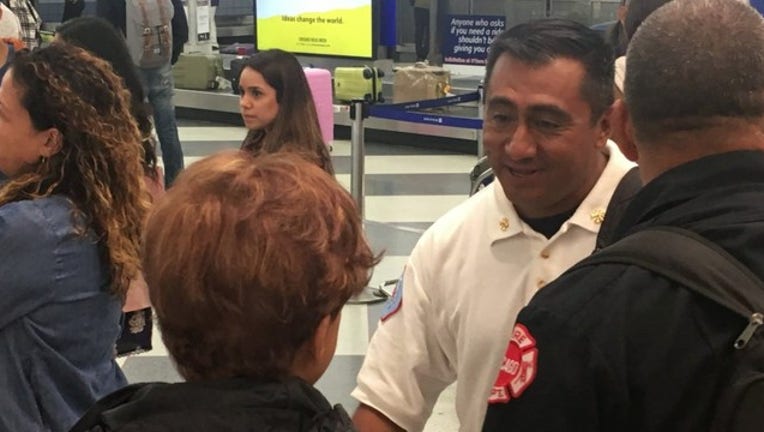 A group of firefighters and paramedics were greeted with applause and cheers as they returned home to Chicago Saturday night after assisting in hurricane relief efforts in Puerto Rico. | Chicago Fire Media

CHICAGO (SUN TIMES MEDIA WIRE) - A group of firefighters and paramedics were greeted with applause and cheers Saturday night as they returned home to Chicago after assisting in hurricane relief efforts in Puerto Rico.

The 23 department volunteers were met by members of the fire department and civilians when they landed about 7:30 p.m. at O’Hare International Airport.

“Thank you to all the Chicago heroes who have dedicated their time and talent to support our fellow citizens in Puerto Rico,” Mayor Rahm Emanuel said in a statement.

The group — which included CFD firefighters, paramedics, EMTs and engineers — left for the island territory Oct. 4 along with Ald. Ariel Reboyras (30th).

The volunteers spent 10 days delivering food and water to remote areas of the island, in addition to providing basic medical attention and clearing trees and other debris from roadways.

Puerto Rico was ravaged by Hurricane Maria and Hurricane Irma last month, leaving dozens dead and infrastructure in shambles. Hundreds of evacuees from the island have been welcomed in Chicago since the devastating storms, according to the mayor’s office.