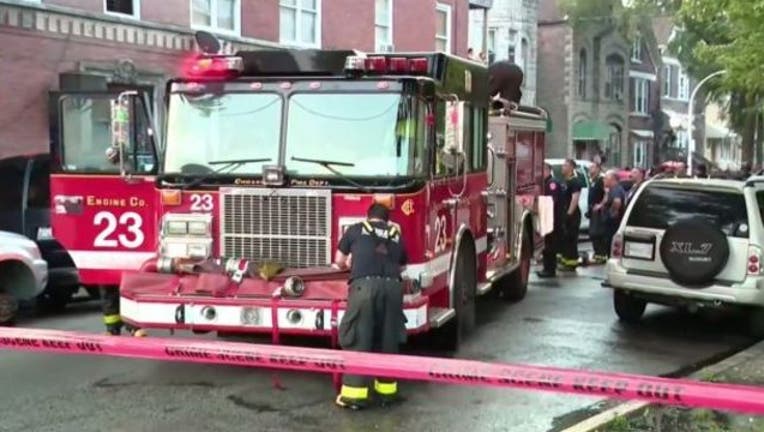 A fire broke out in an apartment early Sunday in Chicago, killing at least eight people, officials said. (WFLD)

CHICAGO (AP) - More than 40 code violations have been issued to the owner of a Chicago apartment building following a fire that killed 10 children earlier this week, according to city records.

The violations include failing to provide working smoke detectors, which firefighters have said likely would've saved the children's lives. City inspectors cited the owner three years ago for a missing smoke detector in the same unit where Sunday's fire began.

The Sunday fire - the city's deadliest blaze in more than a decade - started in the rear of the building during a sleepover. The children who died ranged in age from 3 months to 16 years old.

Violations were also issued this week for defective light fixtures and wiring. Other violations cited debris obstructing exits, a container in the basement filled with gasoline, and evidence of rodent and roach infestation.

Raul Serrato, an attorney representing the owner of the building, said it was unfair of the city to hand out the violations after a fire. Serrato questioned the city's motives in issuing them now.

"They don't want to be seen as maybe that they had a hand in it (by) not aggressively enforcing whatever they needed to enforce against my client," Serrato told the Chicago Sun-Times.

Chicago Building Department spokesman Gregg Cunningham dismissed the suggestion. He said that during prior visits to the building, city inspectors "were given partial access or, in some cases, no entry to parts of the building."

Investigators said no adults were at the home at the time of the fire, and the Illinois Department of Children and Family Services is investigating "allegations of neglect" involving the children. The DCFS inspector general is also investigating whether caseworkers "missed opportunities" to ensure better supervision at the residence.