Video allegedly shows the mom threatening her 12-year-old son with a gun because she wanted her SD card. Prosecutors say she shot him once, answered the phone, asked for the SD card again, and shot him again.

CHICAGO - Fallon Harris’ family, worried about her mental health, had encouraged her to get treatment — advice the longtime city worker finally heeded Friday, meeting with a therapist for the first time.

But just a day later, her family learned the true depths of her despair. Harris now stands accused of killing her cherished 12-year-old son inside their South Chicago home. Kaden Ingram died from multiple gunshot wounds to the head, according to the Cook County medical examiner’s office.

"We didn’t know that this was going to transpire," said Lavell Ingram, her estranged husband and the boy’s father. "We had told her to get help. I guess it finally reached its boiling point."

Though separated, Ingram said he and Harris had remained close for their children’s sake. "She loved [Kaden] more than anything in the world," said Ingram, who’s trying to pick up the pieces and plan his son’s funeral. 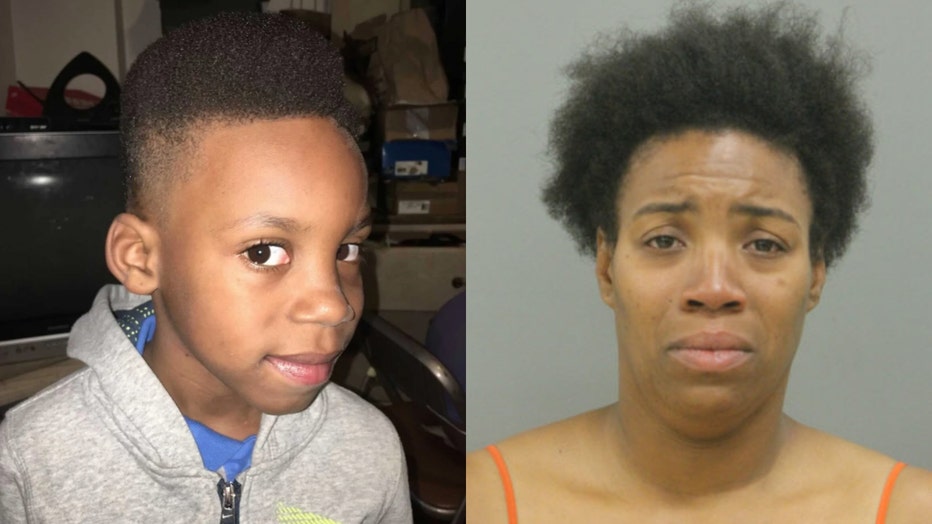 Harris now faces a single count of first-degree murder in his killing at the home in the 8000 block of South Bennett Avenue, according to officials. The 37-year-old was denied bail during her initial court appearance Sunday.

During the hearing, Cook County Assistant State’s Attorney Eugene Wood explained Harris’ violent outburst began around 10:15 a.m. Saturday, when she pressed Kaden about the whereabouts of a digital memory card she had removed from her vehicle the previous night.

After Kaden was unable to produce the memory card when his mother demanded it at gunpoint, she shot him, Wood said Sunday during Harris’ initial court appearance.

A video surveillance camera inside the home captured audio of that first confrontation and gunshot.

Harris then answered a phone call before demanding the memory card again from Kaden, who was still "conscious and crying," Wood said. When he said he didn’t know where it was, she shot him again.

That second shot, which caused Kaden to collapse on the kitchen floor, was clearly captured on video, Wood said.

Harris later admitted to two family members that she had shot her son because he wouldn’t return the memory card, Wood said. In turn, they both called police and Ingram, who met officers at the home.

When she answered the door, Harris confessed to the officers and led them to a silver revolver, according to Wood, who said she had a concealed-carry license and owned two guns.

Kaden was taken to the University of Chicago Medical Center, where he was pronounced dead, according to Wood and the Cook County medical examiner’s office. He died from multiple gunshot wounds to the head.

Several hours after the shooting, officers filed in and out of the brick house, some carrying bags of evidence. Tearful relatives later arrived, hugging each other across the street from the scene, but they declined to speak with a reporter.

Wood directly acknowledged Harris’ mental state, noting family members reported she had been displaying "paranoid behavior" and complaining that people were out to get her. Harris was disruptive and combative early in the hearing and later broke down and appeared to cry when she was given an opportunity to speak.

Harris’ court-appointed attorney described her client as a lifelong Cook County resident who has worked as a city laborer "for some time now." City records show that she’s employed by the Chicago Department of Transportation at the rate of $45.90 an hour.

Judge Mary Marubio ultimately ordered Harris held without bail, as Wood had requested. Marubio also signed a health care order allowing Harris to be evaluated. Her next court date was set for Monday.

Meanwhile, Ingram said he fears his estranged wife has grown detached from reality.

"I don’t even think she understands what happened," he said.