Toxic chemicals called PFAS found in half of US cosmetics tested

Researchers at the University of Notre Dame tested more than 230 commonly-used cosmetics from top brands.

BALTIMORE - A shipment of children’s toys bound for the U.S. was seized after officials detected that the items were "excessively" coated in unsafe levels of heavy metals, including lead and cadmium.

The shipment, which originated in China and was bound for an address in Fairfax, Virginia, was seized on Oct. 4 by Customs and Border Protection. The shipment of seven boxes included nearly 300 packages of Lagori 7 Stones, a popular children’s game in India where children throw a ball at seven stacked square "stones," officials said.

The toys were initially inspected on July 16 by a Consumer Products Safety Commission (CPSC) compliance investigator. CBP held the shipment and submitted nine samples to the CPSC’s lab for analysis on Aug. 24.

"That CPSC analysis revealed that the toys were coated in lead, cadmium and barium that exceeded safe levels for consumer products. CPSC directed CBP to seize the remaining shipment in accordance with the Federal Hazardous Substances Act," a statement from Baltimore CBP reads. 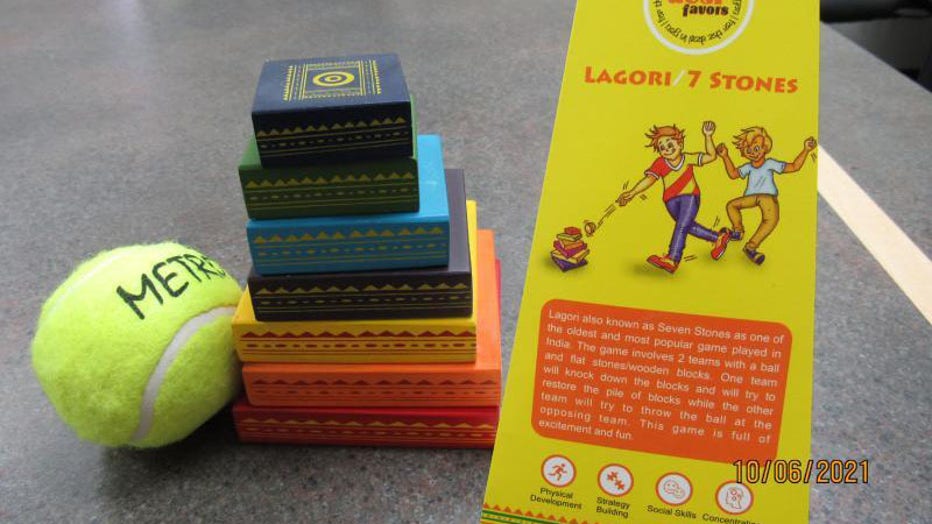 Lead poisoning can hurt a child’s brain and nervous system and slow down growth and development. No safe amount of lead has been found in a child’s blood, according to the U.S. Centers for Disease Control and Prevention.

Cadmium, a natural element found in the earth's crust, has been used to make batteries and other products. It's listed as a cancer-causing substance by the National Cancer Institute, and studies have found other health effects associated with exposure.

Experts say exposure generally occurs in workplaces where cadmium products are made. In children, it generally happens through food, environmental tobacco smoke and house dust.

Barium poisonings are uncommon and usually result from accidental contamination of food sources or inhalation exposure at work, according to research by the California Poison Control System.

"We hope that seizures like this helps to raise consumer awareness about the very real threats posed by seemingly safe children’s toys and we urge consumers to conduct their due diligence when purchasing holiday gifts online this year," Adam Rottman, CBP’s Baltimore area port director, said in a statement.

In total, CPSC said nine toy-related deaths among children 14 and under were reported during 2020, though none were related to poisonings. Four of the deaths involved airway obstruction from a balloon and one involved a rubber ball. Other deaths reported involved a stuffed toy in an unsafe sleep environment, choking on small parts of a toy, the agency said in a report.

An estimated 198,000 toy-related injuries were treated last year in U.S. hospital emergency departments. Among them, roughly 73% occurred in kids 12 years or younger, and 40% happened to children under four.

"The health and safety of our nation’s children remains a priority concern for Customs and Border Protection, CPSC and all of our consumer safety partners," Rottman said.