A lawsuit has been filed against the owners of two dogs that attacked a jogger in St. Charles, leaving her hospitalized for over three weeks.

ST. CHARLES, Ill. - A concealed-carry holder who rescued a jogger who was viciously attacked by a pair of dogs last year in St. Charles has been recognized for his heroic actions.

Chris Shanahan was honored with the Heroic Citizen Award by Kane County Sheriff Ron Hain during Tuesday's county board meeting.

On the morning of Dec. 13, Shanahan was driving through his neighborhood on Windsor Drive in St. Charles Township when he saw a woman attacked by two large dogs.

Laura Kizman, 51, was jogging when a Labradoodle ran from a nearby yard to greet her, according to the Kane County Sheriff's Office. Kizman attempted to escort the dog back to its caretaker, who was in her driveway, when the caretaker's two other dogs charged and attacked her, police said. 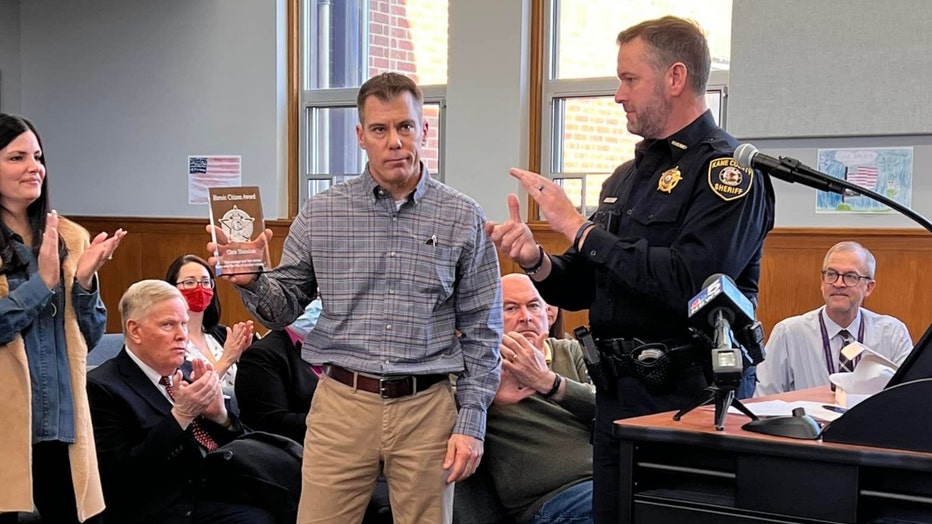 Sheriff Ron Hain recognized resident Chris Shanahan in front of the Kane County Board for his heroic actions to save the life of another citizen in December of 2021. Mr Shanahan intervened when he witnesses his neighbor being brutally attacked by two (Kane County Sheriff's Office)

Shanahan saw Kizman on the ground, desperately trying to fend off the Rottweilers, and attempted to pull the dogs off Kizman but was unsuccessful.

Shanahan then called his father to retrieve his firearm, and shot one of the dogs, causing both of them to flee. The dog that was shot died a short time later and the second Rottweiler was euthanized the next day, according to police.

Kizman suffered "severe wounds" to both legs, her arm and head, attorneys said. She was transported by helicopter to Good Samaritan Hospital's Trauma Center where she underwent emergency surgery. She was hospitalized for over three weeks. 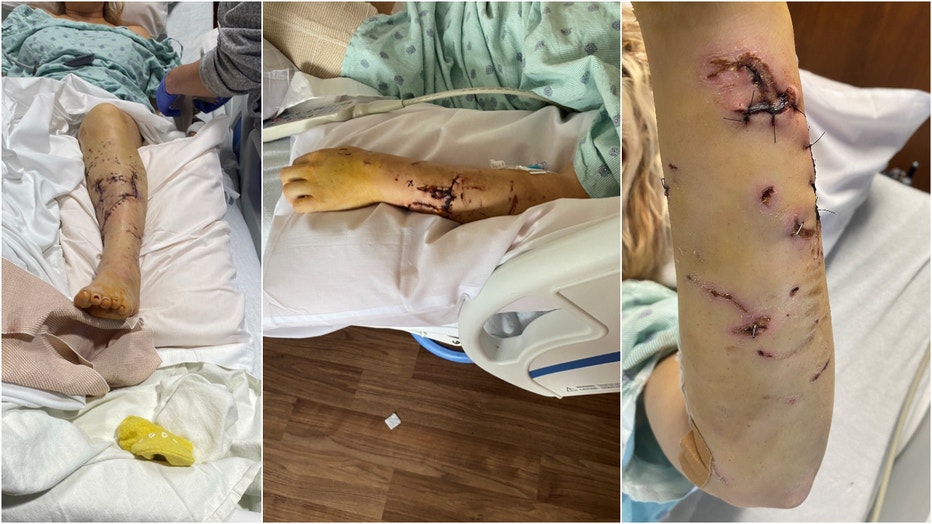 Images of the injuries inflicted on Laura Kizman after she was attacked by two Rottweilers in St. Charles in December | Cavanagh Law Group

On Tuesday, Shanahan received a standing ovation from the Kane County Board and others after he was presented the Heroic Citizen Award.

"Chris Shanahan is a true hero and it was an honor to recognize him for his swift actions to save Ms. Kizman’s life," said Sheriff Ron Hain.

Shanahan said his sense of urgency escalated when he realized it was Kizman, a family friend, who was under attack.

"I was prepared to do this for anyone. It didn’t matter who the victim was in this particular incident, I was committed to stopping and preventing what could have been a terrible, terrible tragedy," Shanahan said. 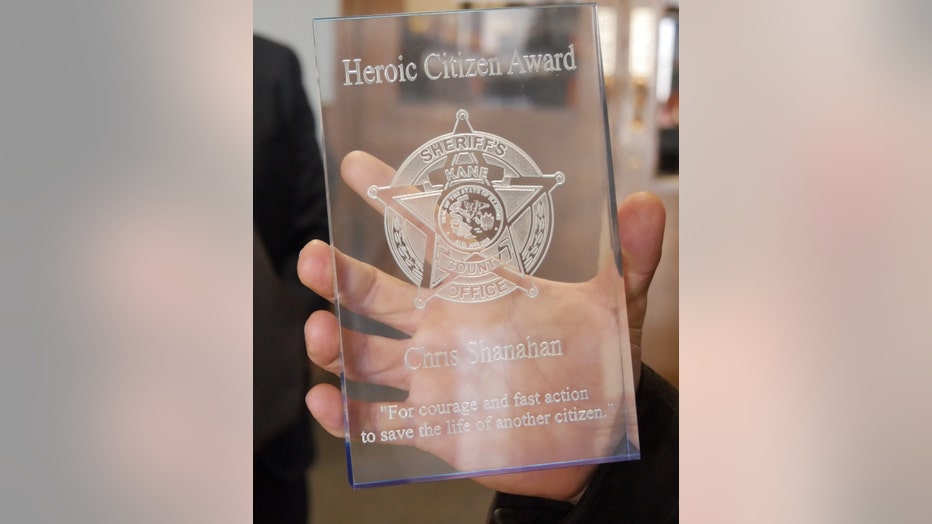 Attorneys for Kizman filed a lawsuit in January against Steven and Ann Dorando for failing to take proper precautions to control the two Rottweilers that "inexplicably attacked her and began using her like a chew toy."

"The physical and emotional injuries Laura suffered from this horrific attack were extremely severe. Her very difficult recovery still continues and she will deal with lasting injuries from this for the rest of her life.," Kizman’s attorney, Timothy J. Cavanagh, said in a statement. "This attack would not have happened if the Dornados had been responsible dog owners. They were aware their dogs could be dangerous yet they did not take proper precautions to restrain  or train the dogs so they would not go after people.."

LAWSUIT FILED AGAINST OWNERS OF 2 ROTTWEILERS THAT ‘VICIOUSLY’ ATTACKED MOTHER OF 4 IN ST. CHARLES

Kizman said the attack and its aftermath has taken an emotional toll on her family. With her husband out of town on a business trip on the day of the incident, Kizman said her 18-year-old daughter had to "step into adulthood very quickly and be by my side."

"Obviously I’m crying about it so it did take its toll on my family," she said. "But they’re kids and they’re very resilient and they’re just glad that I’m back and have my sassy attitude, I guess."