The suspect, identified as 34-year-old Klevontaye White, had escaped electronic monitoring and was shot and killed in a July 9 standoff with Chicago police, federal marshals and sheriff’s deputies, the Civilian Office of Police Accountability said.

White — facing more than a dozen counts of aggravated sexual assault — was in a black Jeep when he was confronted by federal marshals and Cook County sheriff’s deputies around 9:40 a.m. in the 100 block of South Kilpatrick Avenue.

They approached the Jeep and ordered White out but he refused, COPA said. They then called for help from Chicago police.

Klevontaye White, 34, has been identified as the man wanted on two warrants fatally shot by Chicago police.

White displayed a gun and three police officers and a marshal opened fire, COPA said. White was taken to Mount Sinai Hospital, where he was pronounced dead.

A handgun was recovered at the scene, police said. Brown said it was unclear if White had fired shots at the officers, though officers at the scene can be heard on the police radio saying shots were fired at them.

As the confrontation unfolded, a sheriff’s officer radioed that there was a man with a gun inside a Jeep. A police dispatcher directed officers to the scene and warned them to "take cover."

Officials provide an update after a person was shot by police during a standoff Friday morning in West Garfield Park.

Soon afterwards, someone radioed, "Shots fired at police." Minutes later, the dispatcher was told, "The offender is down."

White was wanted on 15 counts of aggravated sex assault with a firearm, and had violated his electronic home monitoring by cutting off the bracelet, Brown said. A warrant for his arrest was filed on Dec. 4, he said. Brown said he believed White lived on the block where the shooting occurred.

Brown used the incident to repeat once again his claim that the Cook County courts system is fueling gun violence by releasing on electronic monitoring people charged with violent crimes.

"If this debate that we’re having saves one life, then all the criticism is worth it," said Brown, who has been accused by the county’s chief judge and prosecutor of mischaracterizing the monitoring program and using isolated cases to blame it for rising violence. 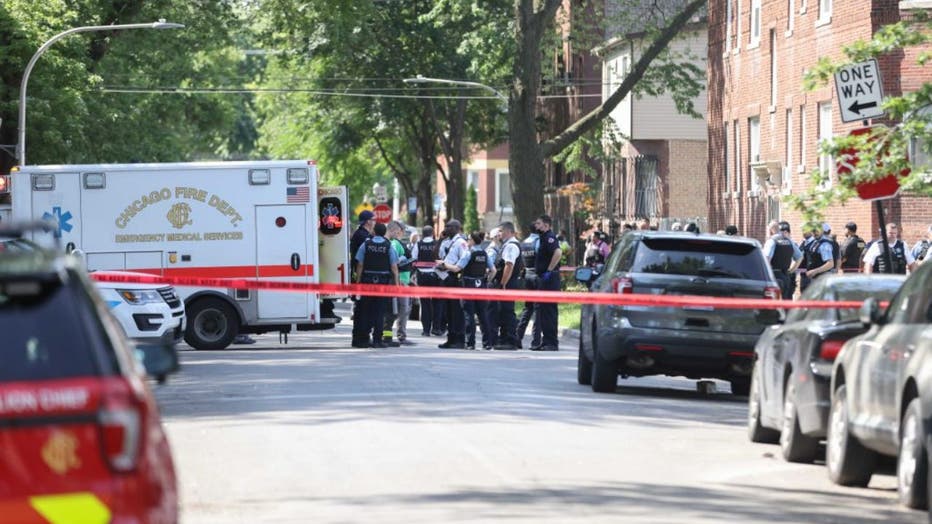 Police officers at the scene where a person was shot during a standoff with police Friday morning in the 100 block of South Kilpatrick Avenue. (Anthony Vazquez)

"I’ve mentioned that 7-year-old Jaslyn Adams was killed by someone on electronic monitoring," Brown said, referring to a shooting at a McDonald’s drive-thru earlier this year. "We are advocates for the victims."

The U.S. Marshals Service was leading the investigation into Friday morning’s shooting. The Civilian Office of Police Accountability was investigating the three Chicago officers’ use of force.

COPA, which also released documents and other recordings of the investigation, was continuing to investigate the officer's use of deadly force.