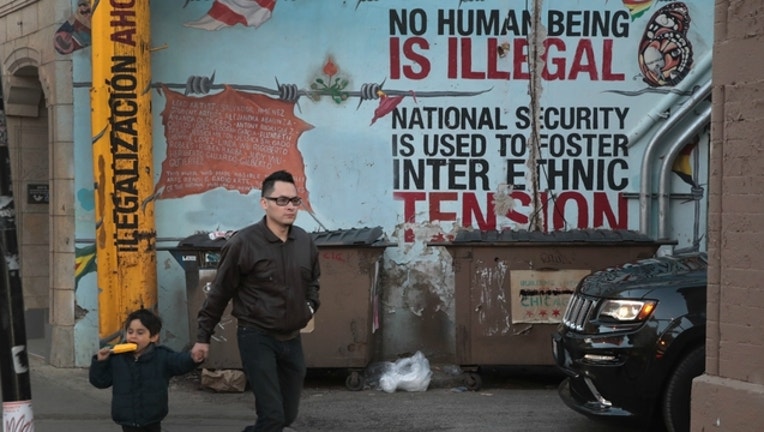 The U.S. Justice Department has accused four cities including Chicago of violating the law with their 'sanctuary city' policies. (Photo by Scott Olson/Getty Images)

CHICAGO (AP) — Oral arguments before a federal appeals court Friday focused on whether President Donald Trump’s administration is overstepping its authority by seeking to withhold public safety grants from so-called sanctuary cities, like Chicago, unless they do more to help enforce U.S. immigration laws.

Attorney General Jeff Sessions appealed to the 7th U.S. Circuit Court of Appeals in a bid to reverse a lower-court ruling in an ongoing lawsuit brought by the city of Chicago that temporarily freezes the policy in all 50 states.

In a related case, a federal judge in California in November blocked a Trump executive order nationwide that cut funds to sanctuary cities, saying the president can’t set new conditions on spending OK’d by Congress.

Chicago lawsuit’s takes issue with new conditions the Trump administration set for cities to qualify for the grants, including that they inform federal agents when immigrants in the country illegally that are detained by police are about to be released. The city wants the temporary injunction to eventually be made permanent.

One judge on Friday’s three-judge panel, Judge Ilana Rovner, strongly suggested she believes Trump’s administration was expanding its powers beyond those Congress intended to give in the 2006 legislation establishing the program, which provides federal money to cities to buy public-safety equipment, including police cars.

“Where’s the separation of powers? What’s going on?” she said.

She said the administration was going down “a slippery slope” by arguing it can “conscript” city police into enforcing federal laws by threatening to withhold such grants. Permitting that, she said, may infringe on states’ rights and encourage administrations to try and get cities to enforce other administration policies.

When Justice Department attorney Chad Readler responded that there’s a tradition of federal, state and local authorities cooperating, she interrupted.

Readler also argued that legislation on the safety grants program included the words that the federal government can set “special conditions” to qualifying for the funds.

A city lawyer, Benna Ruth Soloman, conceded the words were in the legislation. But she said the context in which they appear in the statute made clear the purpose wasn’t to give presidential administrations the green light to think up new conditions on their own.

“He can’t simply rely on the words ‘special conditions’ (appearing in the law),” she said. “Context is very important.”

Rovner, who was appointment by then-President George H.W. Bush, asked nearly all the questions during the 45-minute hearing, sounding sympathetic to the city’s position. The two other judges were William Bauer, a Gerald Ford appointee, and Ronald Reagan-appointee Daniel Manion.

A ruling by is expected in several weeks.