Gov. J.B. Pritzker speaks at a news conference Thursday morning about the impact of the new legislation he signed impacting the state's criminal justice system.

CHICAGO - A little-known provision of the SAFE-T Act — the criminal justice reform law Gov. J.B. Pritzker signed last year — now requires that criminal defendants who are on home confinement while awaiting trial must be given a minimum of two days a week to move freely, without being actively monitored.

During that time, they’re supposed to be working or looking for a job, undergoing treatment for mental illness or drug addiction, attending school or buying groceries, according to the law.

But since the provision took effect Jan. 1, dozens of people on home confinement have gotten into trouble while free of supervision during those "essential movement" days when they aren’t monitored, the Chicago Sun-Times has found.

Since Jan. 1, about two dozen people have been arrested in Cook County while on essential movement time — about 1% of the people in the sheriff’s electronic-monitoring program, according to Cook County sheriff’s reports.

One man was accused of committing an armed robbery.

Others were charged with illegal gun possession and drug dealing.

Two others were shot to death.

The 800-page SAFE-T Act — that stands for Safety, Accountability, Fairness and Equity Today — is central to Republicans’ portrayal of the Democratic governor as soft on crime. One of the law’s key provisions, which won’t take effect until next year, will do away with the state’s cash-bail system, making Illinois the first state to do so.

Aurora Mayor Richard Irvin is looking beyond his four foes in June’s Republican primary for governor.

Pritzker has defended the SAFE-T Act.

When he signed the law in February 2021, the governor said, "Transforming the pretrial detention system so low-income people aren’t thrown behind bars while only the wealthy walk free, diverting low-level drug crimes into substance-treatment programs and reducing excessive stays in prison."

But Cook County Sheriff Tom Dart, a fellow Democrat, says the essential movement part of the SAFE-T Act should be scrapped, at least for those charged with violent crimes. He says judges already were signing orders allowing people on home confinement to go to school or work.

"At a bare minimum, they should say, ‘If you’re charged with a violent offense, and you’re given home monitoring, you don’t get to wander around free for two days a week,’" Dart says.

His office is responsible for tracking about 2,400 pretrial detainees who are free on bail and have been ordered to stay at home on court-ordered electronic monitoring. In Cook County, they get essential movement either on Mondays and Wednesdays or Tuesdays and Fridays.

Dart says the 1% figure might understate the extent of the problem because most shootings and other violent crimes in Chicago don’t result in arrests, that there’s no way to know how many people committing crimes on essential movement days aren’t getting caught.

But Sharone Mitchell, Cook County’s public defender, says it’s important to offer the two eight-hour periods free from monitoring and that the "vast majority" of people awaiting trial on electronic monitoring comply with the terms of their release, show up for court dates and don’t commit new crimes.

"Communities are safer when people who have not been convicted of a crime are able to take care of essential life activities, such as shopping for food, going to the laundromat and doctor appointments and picking up children from school," he says.

But Dart says the case of 19-year-old Charles Monroe illustrates his worries about essential movement.

Last year, officers on a carjacking task force said they saw Monroe toss a gun from a stolen vehicle. He was arrested on a gun-possession charge and placed on home confinement while awaiting trial. March 3 was one of his unmonitored days. That day, an informant at the Cook County Jail told sheriff’s officials he saw Monroe get out of a car and point a Draco assault weapon toward the jail.

Investigators went back and checked Monroe’s GPS device and confirmed he’d been near the jail at 3:21 p.m. that day, according to a sheriff’s report, though no shots were fired.

They also said someone identified only as "Charlie" spoke on the phone with someone being held at the jail and told him, "I was going to shoot one in the air or shoot one at County."

On March 7, authorities searched a West Englewood home where Monroe was living and found five guns, including a Draco assault weapon, according to a sheriff’s report. Monroe was charged with illegal gun possession, denied bail and ordered held at the jail, where he’s now awaiting trial, records show.

Monroe’s attorney didn’t respond to a request for comment.

Dart says he’s also troubled by the case of Rickie Adams, 23, of West Pullman, who was arrested in 2020 on a gun-possession charge and placed on court-ordered home detention with electronic monitoring.

On Feb. 7, Adams went to Westforth Sports, a gun store in Gary, Ind., while he was on his twice-a-week essential movement, according to sheriff’s officials, who say that out-of-county trip violated the terms of his release. 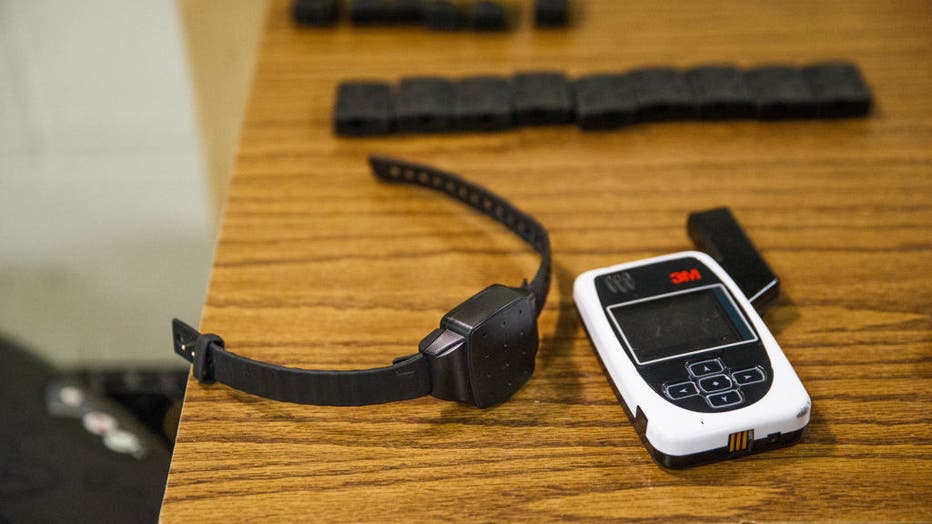 A sheriff’s spokesman says the agency doesn’t actively watch where people go when they’re on essential movement but it can review their movements later, if needed, and the GPS tracking devices will trigger alarms if they leave the county.

Still, Mitchell says, "People on sheriff’s electronic monitoring are under GPS surveillance at all times, including when they are allowed essential movement for two 8-hour periods a week."

Investigators searched Adams’ home on Feb. 18 and say they found three guns, including a stolen Glock handgun, for which he was charged with illegal gun possession.

On March 3, Adams pleaded guilty to his 2020 gun charge. He was sentenced to three years in prison but was paroled because the judge credited him with the time he’d spent on electronic monitoring, records show.

Adams is now free on bail while awaiting trial over his Feb. 18 gun arrest. On March 8, he was released from jail after posting $500 bail, court records show.

His lawyer didn’t respond to a request for comment.

Some of the other people arrested while on essential movement include two men accused of shoplifting at the Saks Fifth Avenue on North Michigan Avenue. One was accused of stealing three sunglasses worth more than $1,000 on Jan. 20 and the other of stealing more than $4,000 worth of clothes on Feb. 17.

Another man on essential movement was accused of stealing $350 of liquor from a Mariano’s grocery store in Evergreen Park on Jan. 4.

Three people have died this year while on essential movement in Cook County. One man was shot to death in a car, and another was fatally shot while sitting at a bus stop. The motives for those shootings are unclear. A third man died of a drug overdose.