DETROIT (FOX 2) - FOX 2 spoke with a number of officers about what happened and it is not sitting well with them. The two officers in question are off the street. The men involved in that shooting are still at large.

FOX 2 spoke with a number of officers about what happened and simply said it is not sitting well with them. The two officers in question are off the street. The men involved in that shooting are still at large.

A Detroit police officer is suspended with another on medical leave after apparently fleeing the scene of a shooting that unfolded right in front of them.

Sources say it happened near Schoolcraft and Greenfield back on June 30th. Video of the incident is courtesy Deadline Detroit.

White addressed the officers' response - or lack thereof - during a press conference Friday.

The victim who be seen here in the blue shirt was struck but survived.

A sedan pulled up in front of him, a man in the back seat hung outside the window and opened fire with a semi-automatic rifle. All of it was captured on police dashcam.

The officers drove off, but at some point turned back around to help the victim.

The gunman and driver got away.

"What I'm looking to understand is prior to leaving the scene and providing assistance, what did they think they were doing," White said. "I need to know a lot of things that I don't want to discuss right now, but it has to do with, were they secure enough to take immediate action."

Some former top brass at DPD weighed in on the incident.

"Absolutely," said Steve Dolunt, retired Detroit assistant police chief. "Yes, you pull your gun. He's shooting at somebody. You pull your gun when you're in fear of your life, or someone is in fear of their life."

Dolunt said the officers in question did not come clean about what happened.

"It appears they were hiding something at first because again, it came to light through a routine investigation of the cameras, and the supervisor says 'Wait a minute,'" he said. "So it wasn't reported to them right away."

That supervisor sent it up the chain of command prompting an investigation and the immediate suspension of the female officer who was behind the wheel.

"I think what is disconcerting for citizens is, and I don't want to generalize, we see a lot of instances where unarmed individuals are given a hard time by the police," said Ralph Godbee, former Detroit police chief. "And police say they fear for their lives. This was an actual shooting in progress that the officers witnessed and they did not engage the threat." 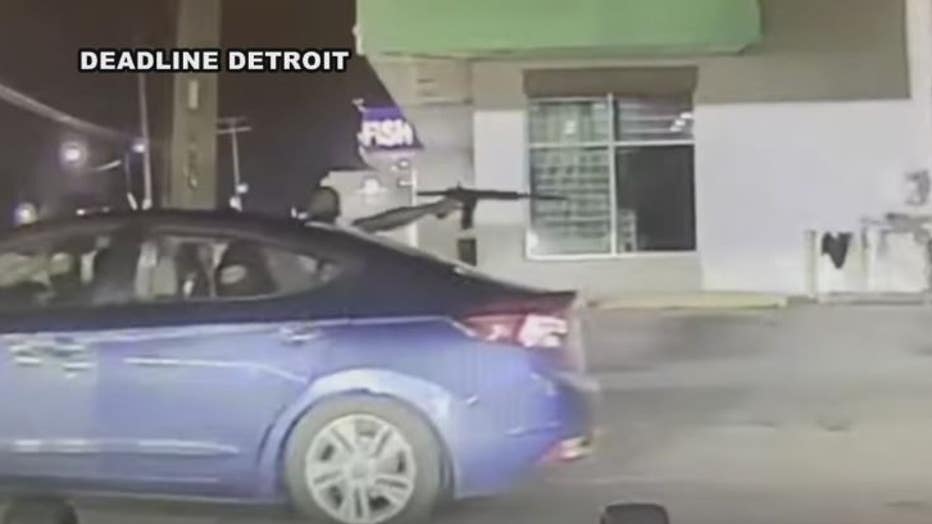 Godbee says cops are supposed to be the people who run to danger - not away from it.

"Do we get hired to die? No. But we do understand that there's a risk inherent in what we do," he said. "But that risk is for the greater good of society."

White said the incident is an outlier.

"Individualized incidents do not represent the hard work of the over 2,000 men and women of this department that they do day in, and day out," White said.

White says he is waiting for the officer on medical leave to get back so the investigation can get wrapped up and then a final decision on their future with DPD can be decided.