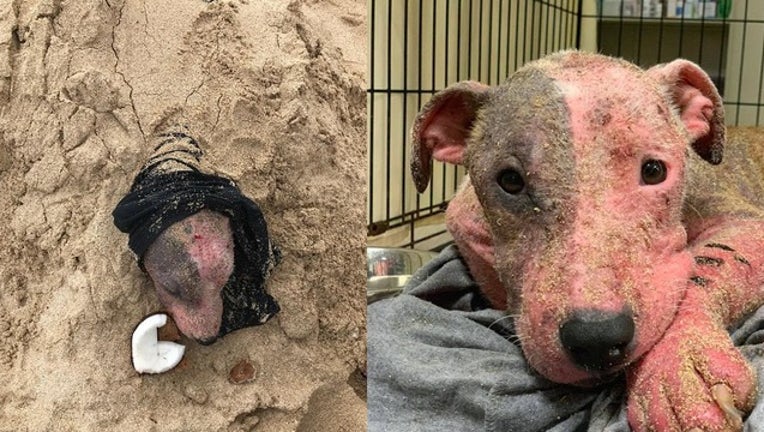 FOX NEWS - A dog is recovering after being discovered last week buried alive on a beach in Hawaii, according to an animal rescue.

PAWS of Hawaii said on Facebook the dog, named Leialoha, was discovered July 9 on a beach on the island of Oahu "incredibly swollen, sunburned and missing 90 percent of her fur."

"This beautiful girl was found by one of our team members," the group said. "Someone had just buried her and they had a machete so who knows what was next."

A Good Samaritan reported had reported to the animal rescue that a man was burying the dog in the sand.

Officials said they discovered lacerations in one her front left leg and suspected the same man caught burying the animal used a knife to cut the dog.

"Severe sunburn, lesions, swollen limbs in her extremities -- that is a sign of being very dehydrated and very poor care," veterinarian Kelly Dowdall-Garberson told KITV.

On Thursday, PAWS said that Leialoha was able to take her first bath, but was "bleeding from every inch of her body."

The dog has since been taken into a foster home. On Saturday, the group shared an update from the foster mom identified as Amanda.

"Leialoha has come so far since Tuesday night. Initially, she would only leave her kennel to go to the bathroom," the group quoted Amanda as saying. "Last night, she came out, while we had friends over to see what was for dinner and has been liking being under the coffee table. She has a long way to go, but the worst is over."

PAWS of Hawaii said they expected her to "bounce back," and thanked people who donated money towards Leialoha's medical costs, according to Storyful.