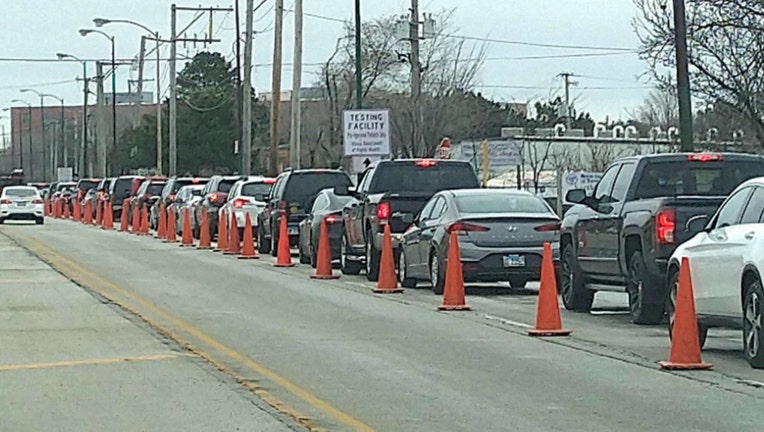 Cars wait outside a COVID-19 test site on the Northwest Side on March 23, 2020. | Chicago Fire Department

CHICAGO - The first state-operated drive-thru test site for COVID-19 opened Monday to first responders and health professionals at a repurposed vehicle emissions test building on the Northwest Side.

The Illinois National Guard will test 250 people on a first-come, first-served basis from 9 a.m. to 5 p.m. daily, according to Chicago Fire Department spokesman Larry Langford.

State officials couldn’t say if the site will later test the public.

The site is also the first drive-through test site operated by the state, according to Illinois Department of Public Health spokeswoman Kim Biggs. Two test sites that opened over the weekend in Walmart parking lots in the suburbs were run by the Department of Health and Human Services.

Langford said he spoke to a few first responders in line who were testing “to be safe,” and not because they showed symptoms.

“They want to make sure they’re in good shape before dealing with the public,” Langford said.

The test site reached its daily capacity by 12:30 p.m.

“People showing up now are being waved off and told to come back tomorrow,” he said.

Langford said the building, a state vehicle emissions test facility shuttered in 2016, lends itself to testing for the virus because of the lanes and drive-thru.