LOS ANGELES - For voters resorting to mail-in ballots amid the COVID-19 pandemic, experts warn not to wait until the last minute.

According to a recent report by FiveThirtyEight, a website dedicated to political polls and analysis, waiting until your state’s deadline to mail in your ballot could mean your vote isn’t counted.

The USPS has already warned in a series of letters to 46 states and Washington, D.C., that it may not be able to handle the surge in mail ballots for the upcoming election due to a high demand in service by the Postal Service from voters afraid to venture into public polling centers due to the ongoing coronavirus pandemic.

In response to the demand, the USPS said in a news release last week that it had launched an election mail website aimed at providing information to voters and election officials about the mail-in voting process.

What’s the difference between mail-in and absentee voting?

President Trump has repeatedly attacked voting by mail as a less secure process than absentee voting, leading to confusion about the two terms.

The USPS announcement of the website’s launch followed congressional testimony by Postmaster General Louis DeJoy, in which he claimed that he was unaware of recent mail operation changes until they sparked a public uproar.

DeJoy had promised to postpone any further changes to the service until after the election, saying he wanted to avoid even the perception of interference.

RELATED: How to cast your ballot without using USPS ahead of the 2020 election

A number of blue mailboxes have been removed, back-of-shop sorting equipment has been shut down and overtime hours have been limited.

But DeJoy told senators he has no plans to restore the equipment, saying it’s “not needed.” And he stood by a new rule that limits late delivery trips, which several postal workers have said is a major cause of delivery delays. He vowed more changes are coming to postal operations after November.

DeJoy told senators that election mail would be prioritized for delivery as in years past.

“To account for delivery standards and to allow for contingencies (e.g., weather issues or unforeseen events), voters should mail their return ballots at least 1 week prior to the due date established by state law,” the USPS said in a May press release.

A majority of Americans in 2020 say they favor the option to vote early, too — which has become an increasingly popular method of casting a ballot in recent years.

Pew Research found that about two-thirds of voters surveyed (65%) said the option to vote early or absentee should be available to any voter without requiring an excuse. The number of voters who have chosen to vote early in-person has also increased from 8% in 2004 to 17% in 2016, according to the U.S. Election Assistance Commission. 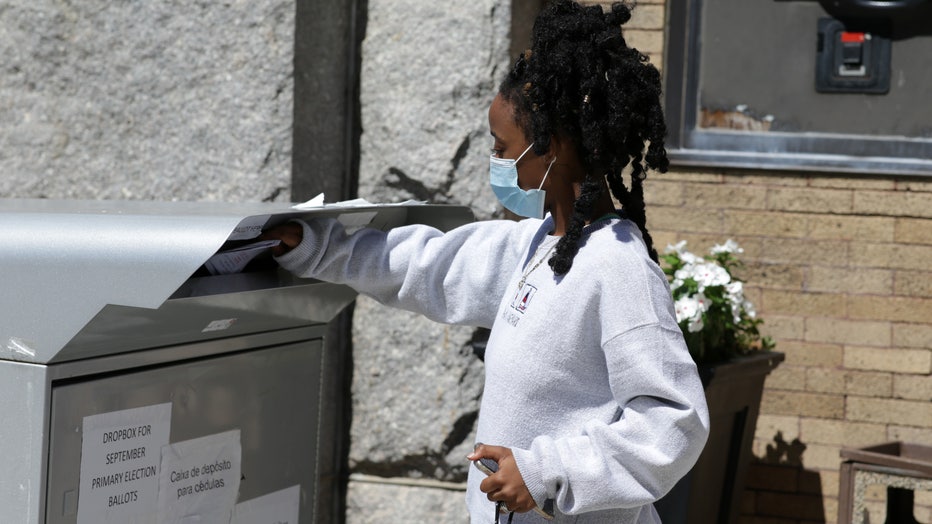 A woman places a ballot at the Mail in Drop Box Voting Box outside of Brockton City Hall in Brockton, MA on Aug. 26. 2020, before the September 1 Primary Election. (Photo by Jonathan Wiggs/The Boston Globe via Getty Images)

Meanwhile, because some states only require mail ballots be requested up until a few days before Election Day, FiveThirtyEight reported that in almost all 50 states, waiting until the last minute runs the risk of voters’ ballots not being counted in time.

“We’ve been working on this for a while across the country to encourage states to update their laws to reflect the realities of how the post office actually works,” Amber McReynolds, CEO of the National Vote At Home Institute, told FiveThirtyEight. “The reality is that voters are going to fail if election officials are being asked to mail ballots out that late.”

If you’re not among the 64% of voters mailing in their ballots, 40 states and the District of Columbia offer some form of in-person early voting, according to the nonprofit, bipartisan voting information site Vote.org.

RELATED: Early in-person voting is an option for many across the US in 2020

Casting your ballot early in person comes with a number of perks, including the ability to avoid crowds and long lines on Election Day. You also don’t need an excuse to vote early.

“If voters have any doubt about mail voting or are worried about them getting their ballot in on time, or are unfamiliar with the process, they should absolutely try to vote in person — perhaps early,” said David Becker, founder of the Center for Election Innovation and Research. “That’s the best way to do it, as they can in many states.”

Voters can get specific information about the deadlines for where they live by visiting this link and selecting their state and county.

Various voting rights organizations are also working with sports franchises across the country to ensure those stadiums and arenas will be made available as voting super centers, providing an efficient and safe way for citizens to cast their votes during the pandemic.

Kelly Taylor Hayes and the Associated Press contributed to this story.