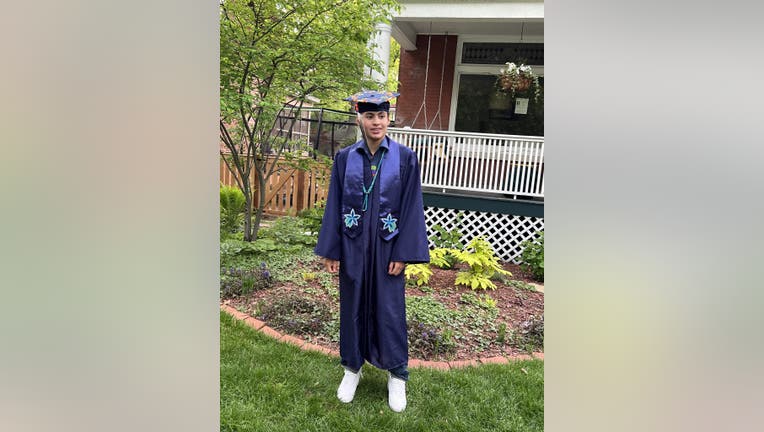 Nimkii Curley wore a graduation cap and stole given to him by members of his Indigenous community to his graduation.

EVANSTON, Ill. - Nimkii Curley was preparing to walk across the graduation stage at Evanston Township High School on Sunday when he was stopped and given a choice: Lose the beads, stole and eagle feather or sit out of the ceremony.

Curley, who is Ojibwe and Navajo, said letting go of the adornments — particularly the eagle feather hanging from his cap — wasn’t an option.

A video, recorded by Curley, shows a school official telling him he can walk if he switches his cap.

The school does not allow decorations on graduation regalia. Curley and his family said the symbols on his cap and gown were more than decorations.

"Eagle feathers for us are connections to creator," said Megan Bang, Curley’s mom. "It’s how we pray, it’s also how we honor leadership and responsibility."

Curley said officials at the ceremony first told him he wouldn’t be able to walk across the stage with the adornments but could sit alongside his classmates. Then he was told by another official that he wasn’t allowed to sit with his peers. He would have to put on the plain cap and gown they offered him or sit on the sidelines.

"They had no clue what they were asking of him," said his dad, Lawrence Curley. "He had his community on his person. He had somebody who took a lot of time to honor him and give him these things, which we actually feel are sacred."

Nimkii Curley sat on the sidelines with his family and watched as his classmates received their diplomas.

"I got to sit up on the second floor … and watch as the superintendent and other speakers talked about how much they valued equity and diversity in their schools and watch my peers receive their diplomas," Curley said.

While administrators later delivered his diploma to his home, Bang said Curley’s graduation had a special significance to their family.

"Nimkii would’ve been the first to walk," Bang said.

Curley’s grandfather, who is 90 and lives with them, attended a Native American boarding school, institutions designed to assimilate Native Americans during the 19th and 20th centuries, according to the National Native American Boarding School Healing Coalition. Lawrence Curley was pushed out of high school before returning to higher education.

"ETHS is reviewing the graduation guidelines, particularly as they relate to acknowledging the history and stories of Indigenous students, and we will let students and families know when there are changes in the future," the school’s communication office said in a statement.

Curley and his parents said they will continue to advocate for the policy to be changed and for more expansive education about Indigenous people and cultures within the curriculum.

"I want to be able to go to class and not have to be the person that’s having to constantly educate my teachers," Curley said.

He hopes to leave behind a more inclusive environment for younger generations, including his two younger sisters who still attend the school.

"We’re trying to do this not just for native people, but for all our members of the community in Evanston and in the broader picture as well," he said.

Curley said he’ll be attending the University of Wisconsin-Madison in the fall to study environmental engineering.