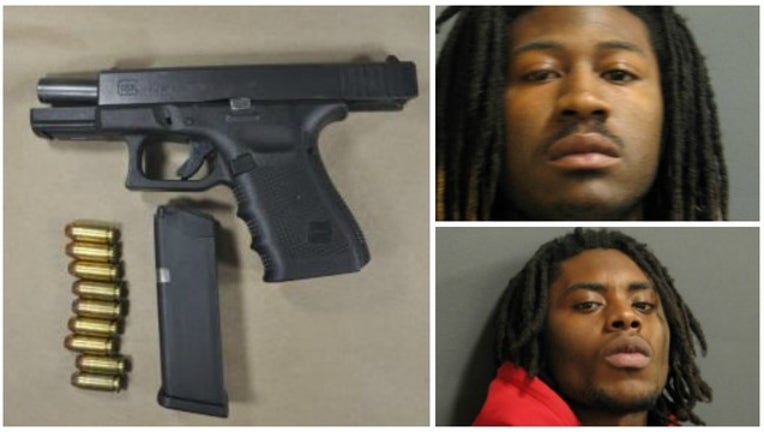 (SUN TIMES MEDIA WIRE) - Evanston police recovered two handguns in separate incidents this week in the northern suburb, one after seeing a Facebook Live post from a known gang member.

At 7:54 p.m. Monday, detectives from the Neighborhood Enforcement Team monitored a Facebook Live post from a known gang member that showed him and four other people driving around in a vehicle while flashing a handgun, according to Evanston police.

Detectives saw the vehicle parked in an alley in the 800 block of Clark Street, police said. As they approached, the driver stayed inside the car, but everyone else ran away.

Three of the people inside the car ran into a restaurant on that block, police said. Another person, later identified as 23-year-old Stephen A. Adams, kept running. Adams was taken into custody after he fell in a parking lot in the 700 block of Clark Street and dropped a loaded Glock .40 caliber handgun.

When backup arrived, the driver and the others who ran away were also taken into custody.

Adams, of the 1800 block of Grey Avenue in Evanston, was charged with one felony count of aggravated unlawful use of a weapon by a felon and misdemeanor counts of no valid FOID card and unlawful contact with a street gang member, police said.

One of the others in the car, 26-year-old James J. Johnson, was charged with a misdemeanor count of unlawful contact with a street gang member. The others were released without being charged.

Early Tuesday, police recovered another gun. About 1:40 a.m., officers on patrol saw a vehicle turn from Main Street to Fowler Avenue without using its signal, police said. The vehicle was stopped in the 2300 block of Bradley Place when the backseat passenger, 20-year-old Terrell Wright, got out of the vehicle and started walking away while clutching his waistband.

Wright tried to run from police, but fell on the snow in the 900 block of Pitner Avenue and tried to throw the gun, police said. He was taken into custody and a loaded Glock .40 caliber handgun was recovered. A plastic bag containing about four grams of cannabis was also recovered from Wright, police said.