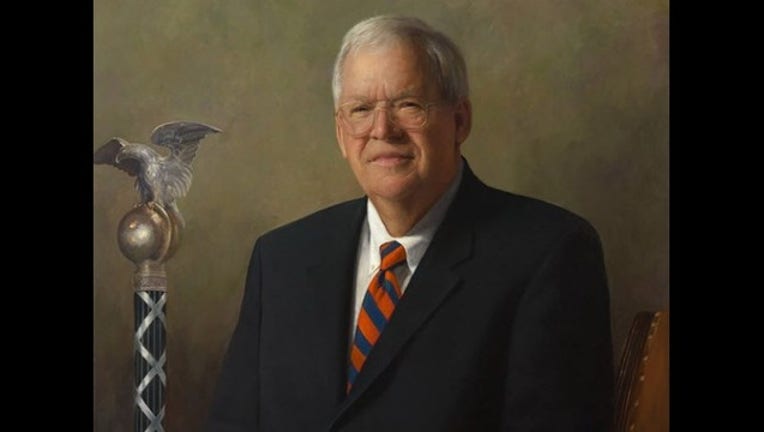 WASHINGTON (AP) — New Speaker Paul Ryan has had a portrait of Dennis Hastert removed from a hallway outside the House chamber, just days after the former speaker pleaded guilty to breaking banking laws in a hush money scheme.

The painting of Hastert, R-Ill., had hung for years in the Speaker's Lobby, a plush area just outside the House chamber where lawmakers and reporters often congregate during votes. That lobby's walls are adorned with portraits of 22 former speakers, with another 28 hanging in corridors and stairwells just outside the lobby.

Its removal marks one of the first visible changes instituted by Ryan, R-Wis., who became speaker last Thursday following the resignation of Speaker John Boehner, R-Ohio. It was taken down over the weekend, said several congressional aides who spoke on condition of anonymity but weren't authorized to openly provide details.

Asked for details about why the portrait was taken down, Ryan spokeswoman AshLee Strong said: "The speaker believed it was appropriate to rotate in a different portrait."

Ryan himself declined to comment as he entered the House chamber late Monday.

Hastert, 73, pleaded guilty last Wednesday to evading banking laws. He acknowledged in a written agreement that he tried paying someone $3.5 million to hide misconduct decades ago, around the period he was a high school wrestling coach.

Anonymous sources have told The Associated Press that the payments were meant to hide claims of sexual misconduct. His sentencing is scheduled for Feb. 29.

Hastert was indicted in May, but Boehner did not have the picture taken down. Hastert was speaker from 1999 to 2007, longer than any other Republican has held that post.

According to the House Clerk's office, the tradition of collecting speakers' portraits began in 1852.

Since 1910, the House has required itself to acquire oil portraits of every speaker. Each since 1910 has had a portrait made, and the House commissioned pictures of speakers who had already died.

Not yet hanging in that lobby are portraits of Boehner and of former Speaker Nancy Pelosi, D-Calif., who is still in Congress as House minority leader.

Where Hastert's picture hung is now a painting of Rep. Frederick Gillett, R-Mass., speaker from 1919 to 1925.