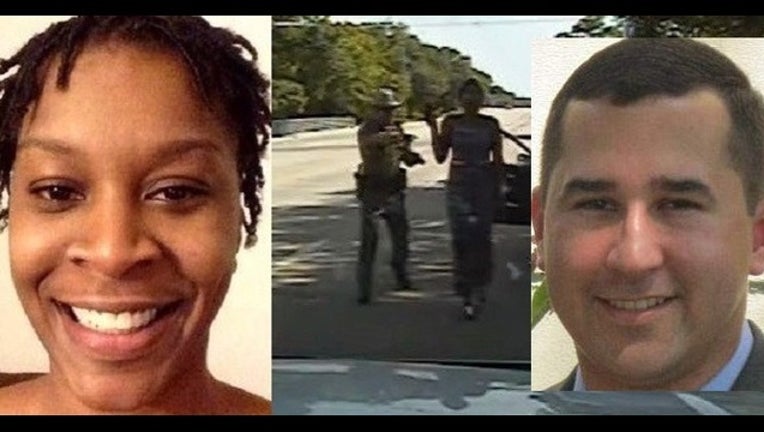 HEMPSTEAD, TEXAS (Associated Press) - A fired Texas trooper pleaded not guilty Tuesday to a charge of misdemeanor perjury stemming from his arrest last summer of Sandra Bland, a black woman who was later found dead in a county jail.

Brian Encinia entered his plea during a brief appearance before a Waller County judge as protesters gathered outside the courthouse in Hempstead, about 50 miles northwest of Houston. One held a sign that read: "What happened to Sandra Bland?"

About 20 to 25 protesters yelled "Tell the truth" and "Sandra still speaks," and at one point directed their chanting at Waller County Sheriff Glenn Smith who stood nearby speaking with reporters. Bland's arrest captured on a police dash-camera video provoked national outrage and drew the attention of the Black Lives Matter movement.

A county grand jury indicted Encinia in January on the perjury charge for saying in an affidavit that he removed a combative Bland from her car after stopping her near Houston for a minor traffic violation so he could conduct a safer traffic investigation.

Video of the stop shows Encinia drawing his stun gun and telling Bland, "I will light you up!" She can later be heard off-camera screaming that he's about to break her wrists and complaining that he knocked her head into the ground.

Encinia's affidavit stated he "removed her from her vehicle to further conduct a safer traffic investigation," but grand jurors found that statement to be false, according to prosecutors.

Bland, who was in the process of moving to Texas from the Chicago area, was taken to the Waller County jail in Hempstead. She was found hanging from a jail cell partition three days later. A plastic garbage bag was around her neck.

A medical examiner ruled it a suicide. A grand jury declined to charge any sheriff's officials or jailers in the death.

Bland's relatives have filed a wrongful death lawsuit, and members of her family were in the courtroom Tuesday.

"I want an opportunity to allow accountability to be shown," said Bland's mother, Geneva Reed-Veal, a Chicago-area resident. "I want answers as to what happened to my daughter, but I still want it to happen in God's way."

Cannon Lambert, the attorney for the family, said they met with prosecutors Tuesday and urged them to aggressively pursue the case against Encinia.

A judge last week ordered the FBI to allow Bland's family to review a report of the Texas Rangers' investigation into her death. U.S. District Judge David Hittner's order is part of the Bland family's wrongful death lawsuit filed in Houston against Encinia and others involved in her detention.

The FBI had initially declined to turn over the report, contending it was protected under law enforcement privilege.

Encinia's next court hearing is scheduled for May 17. The perjury charge is a misdemeanor that carries a maximum of one year in jail and a $4,000 fine.

The Texas Department of Public Safety early this month formally fired Encinia over the stop. He can appeal the decision.

Encinia met last month with DPS Director Steve McCraw, but their conversation gave the agency leader no reason "to alter my preliminary decision," according to a termination letter signed by Encinia.