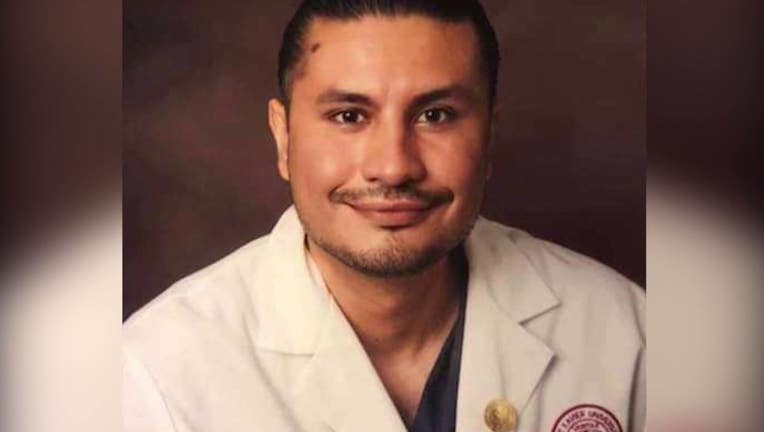 CHICAGO - An overnight chase led to an arrest in connection with a Chicago nurse’s murder.

Police took two suspects in for questioning Friday night, but one has since been released. A family who seeks justice is struggling with that, and hopes the remaining guy in custody is the gunman and that he’ll stay behind bars.

The silver SUV that Chicago police connected to the drive by shooting of Frank Aguilar is now undriveable after a high speed pursuit with police three days after the shooting. It started near 23rd and Sawyer and crashed near 75th and Lafayette.

“As bad as it sounds, I am glad to see that vehicle is destroyed and the individuals are in custody,” said Josh Alcazar, victim’s uncle.

The Misericordia nurse, still wearing scrubs, was shot to death outside his sister’s Little Village home. He’d gone there to do a load of laundry and play video games with his nephew Tuesday night.

“If anyone has information I’d really appreciate if you guys come forward and contact CPD,” said Airam Barahona, victim’s nephew.

The family believes it’s a case of mistaken identity Ariam Barahona found Aguilar lying on the ground. His uncle had already dialed 911 and tried to stop his own bleeding. Now, family say they’re grateful for all the comments on their GoFundMe page. Over and over, people have been calling Aguilar a kind and caring nurse.

“Frank was like, he was my best friend, someone I talked to quite frequently.  When I got the call at 12:00 in the morning I thought it was him calling me to get online to play video games. So when I answered the phone I'm like, hey what's up bro and I was like it’s time to game and it was him telling me he’s been shot and I immediately like froze and panicked and started rushing to the hospital,” said Alcazar.

The man in custody is 19 years old. There are no charges just yet.