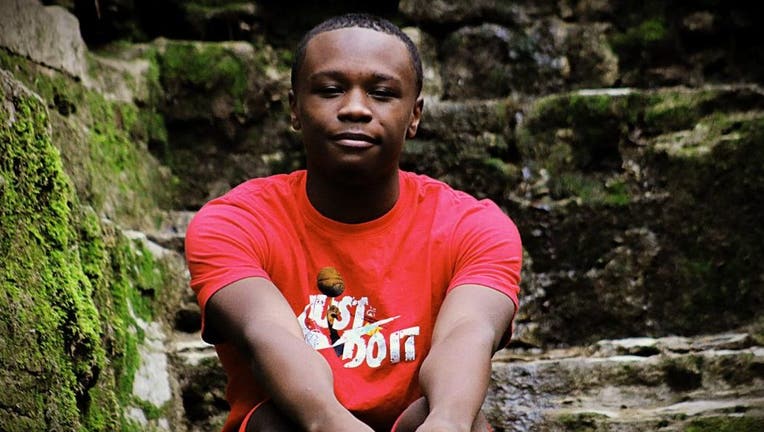 CHICAGO - At 16, Seandell Holliday had big plans ahead of him: He wanted to provide for his family and, a drummer, he wanted to make his own music and open his own studio.

"If I make it to 21," he added in a list of goals he drew up for a mentoring class at Gary Comer College Prep on the South Side.

"I asked him, ‘Why did you put that?’" said the teacher of the class, Vondale Singleton. "He said because there are a lot of things that happen in Chicago, you see so many kids lose their lives at early ages … He couldn’t even make it to 17."

Seandell was shot in the chest during a chaotic scene in Millennium Park around 7:30 p.m. Saturday. Video shows him bleeding badly as he lay near "The Bean" sculpture, other teens screaming and running past him. He was pronounced dead at Lurie Children’s Hospital a mile and a half away.

A 17-year-old, Marion Richardson, was arrested as he ran from the scene and dropped a gun from his waistband. Richardson came to the park with a girl and began arguing with someone from another group who recognized him from an "altercation" at a previous mass gathering, a prosecutor said in court Monday.

A teen was charged with shooting a 16-year-old boy to death over the weekend near "The Bean" at Millennium Park.

Richardson quarreled with a girl in the group and, as he was being pulled away, Seandell jumped him from behind and punched him in the head, prosecutors said. Another boy came up and swung at Richardson, who took out a gun and shot Seandell once in his chest.

Richardson was arrested in the grass at Millennium Park by officers who were nearby, and allegedly told them, "You guys ain’t going to do nothing anyways. A hundred (racial slur) walking towards me. What am I supposed to do? You all just sitting there, bro."

A judge ordered him held on $250,000 cash bail on a count of second-degree murder.

Mayor Lori Lightfoot responded to Seandell’s murder — and the crowds of teens fighting each other — by banning minors from Millennium Park on weekend evenings unless accompanied by an adult.

Seandell was a freshman, "a pretty quiet kid, really sharp, always witty… Deep dialogue. I knew he had a lot in him," Singleton said.

A day after announcing that unaccompanied minors would be banned from Millennium Park on weekend evenings, Mayor Lori Lightfoot took the next step and rolled back the citywide weekend curfew to 10 p.m. from the current 11 p.m.

The teen spent much of the last year in the Champs Male Mentoring class within the high school, with Singleton his teacher and mentor. Singleton said Seandell helped him grow as a mentor.

"The biggest lesson I learned — from all of my mentees really — is that I don’t have all the answers," he said. "I have a philosophy that we’re co-experts. You’re teaching me, we’re all getting better. Seandell taught me the authenticity of being yourself. He wasn’t a crowd follower."

On Monday, Singleton said he faced Seandell’s classmates, who are "heartbroken, just crushed."

"I opened up (class) with tears in my eyes. I said this time is for anyone who wants to share," Singleton said. "This time is about Seandell Holliday, who sat in this space with us as our brother. There was silence for a couple minutes, but then you couldn’t get them to stop talking and sharing their emotions, their feelings about him and their own lives."

Chicago's Millennium Park is normally a popular attraction for families and tourists, but on Saturday night, a teenage boy was shot and killed there. Nate Rodgers reports.

Singleton said the boy’s murder "impacts and affects everyone. Not just Seandell and his family, but his peers and people who live in the area. People who tried to make sense of it."

"We all want to find clear cut answers, but it’s complex," he said about the scenes of teens fighting in Millennium Park Saturday evening. There are financial issues in Black and brown communities, as well as lack of structure and true opportunities, he said.

Many children seek safe spaces they can’t find in their own communities, and downtown sometimes serves that purpose. Seandell’s murder is a lesson for the city "in terms of safety and creating structures to help organize our young people. They deserve to be downtown."