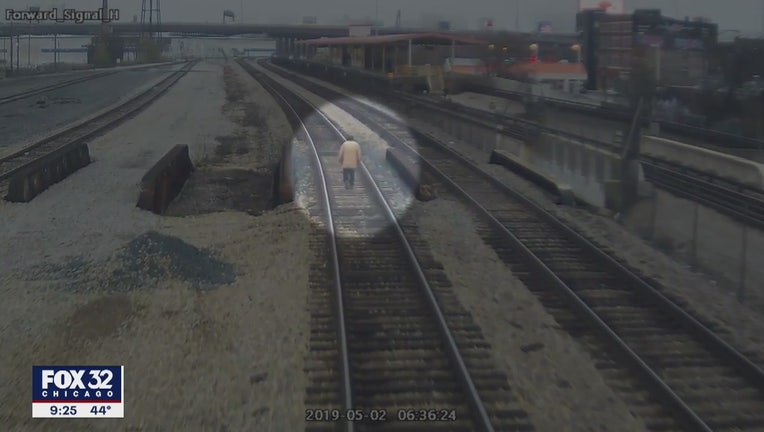 CHICAGO - Metra has been hit with a wrongful-death lawsuit that one Chicago attorney says should frighten all train commuters.

The suit was filed after a South Side man was hit and killed by a train on May 2, 2019.

Multiple surveillance cameras were rolling when the incident occurred. One of the cameras was focused on the train engineer who wearing dark sunglasses.

“I think he's wearing sunglasses because he doesn't want the cameras that are on him to show that he's sleeping, that his eyes were closed,” said attorney John Chwarzynski Jr.

Another camera that shows what’s ahead of the train captured David Vazzana walking right down the middle of the tracks, seemingly not noticing the commuter train about to hit him from behind.

“All the train engineer had to do, had he been awake and paying attention was sound the horn or press the brakes,” Chwarzynski said.

Chwarzinsky filed a civil lawsuit on behalf of Vazzana's family, accusing Metra of negligence. But Metra places the blame squarely on Vazzana.

“The facts are undisputable: Mr. Vazzana was trespassing on the Metra Heritage Corridor,” a statement from Metra read. “Unquestionably, when a person walks down the center of railroad tracks in the path of an oncoming train and does not react to a train approaching him, this can only lead to one tragic result.”

There are clear warnings not to trespass, but Vazanna's attorney says it's not uncommon to see people walking on these tracks.

“For Metra to not accept responsibility for this tells my client and the general public that Metra thinks it's okay for their employees, their engineers to sleep at the wheel,” Chwarzynski said.

Chwarzysnky says the engineer did not report hitting anything, but did sit up and take his sunglasses off after the impact. Almost three hours later, someone on a nearby CTA platform spotted the body on the tracks.

A Metra spokesperson says the engineer is not currently operating a train for Metra.