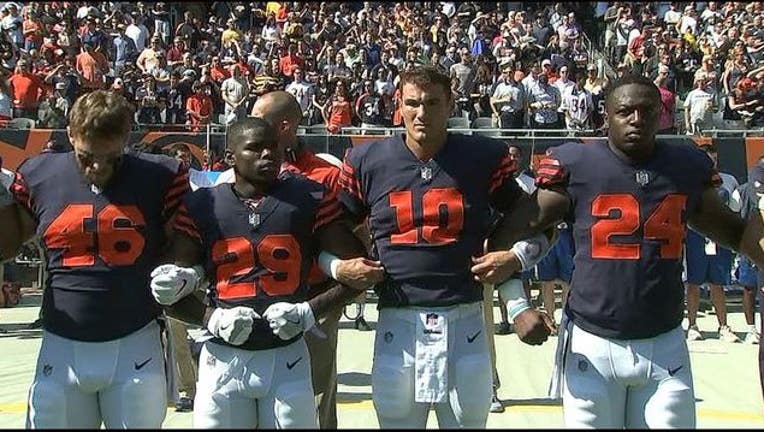 The Chicago Bears linked arms during the national anthem at Sunday's game.

CHICAGO (Fox 32 News) - After the Chicago Bears win at Soldier Field, fans were reacting to President Donald Trump’s condemnation of NFL players participating in protests by kneeling during the national anthem.

Soldier Field was named as a memorial to U.S. soldiers who died in combat.

Matt Sloan, 42, said he traveled from Pittsburgh, Pa. to see his Steelers take on the Bears. He said he’s been a Steelers fan his whole life, however, would now be looking for a new team after the Steelers chose not to take the field during the national anthem.

“For them not to come out at Soldier Field … for them to be that disrespectful and not come out on Soldier Field, I'm done with them,” he said.

Another fan said he believed the First Amendment allowed players to exercise that right however they saw fit.

Trump called on owners to fire players who did not stand as the anthem played.

“I don't listen to what he's got to say. We're American people,” Jose Marquez said.

Marquez said he did not agree with the Steelers’ decision not to come out onto the field as the anthem played.

One Steelers player, Alejandro Villanueva, a U.S. Army veteran, stood in the tunnel as the anthem played with his hand on his chest.

“Everyone has a right, the freedom of speech, on the way they want to do their thing, so if you want to kneel, or you don't want to stand, that's your prerogative,” Marquez said, adding that players should come out onto the field.

“Kneeling’s making a statement but still it's the American flag,” Sloan said, “You're disrespecting the people who give you a right to kneel for freedom.”