Students at Rauner College Prep in Chicago’s West Town neighborhood are grieving the loss of one of their own, a student who was shot a few blocks away from school Tuesday.

The father of a 15-year-old boy who was fatally shot while trying to catch a bus in the West Town area called on elected officials Thursday to stop "pointing fingers" and take action against gun violence in Chicago.

Caleb Westbrooks was shot several times about 1:15 p.m. Tuesday in the 800 block of North Greenview Avenue, blocks from Rauner College Prep where he was a freshman. His father said he was walking to catch a bus home from school when he was shot.

"Unfortunately, this senseless violence is likely to continue unabated until the elected and appointed leadership of the city and county stop pointing fingers at one another and take personal responsibility for the role they have played in the disintegration of the criminal justice system as well as the lack of critical mental health services in Chicago and Cook County," Corneal Westbrooks said in statement.

"Our world is shattered. Caleb was a smart, vivacious and athletic teenager who was looking forward to a bright future with goals and dreams that now will go unfulfilled," Westbrooks said. 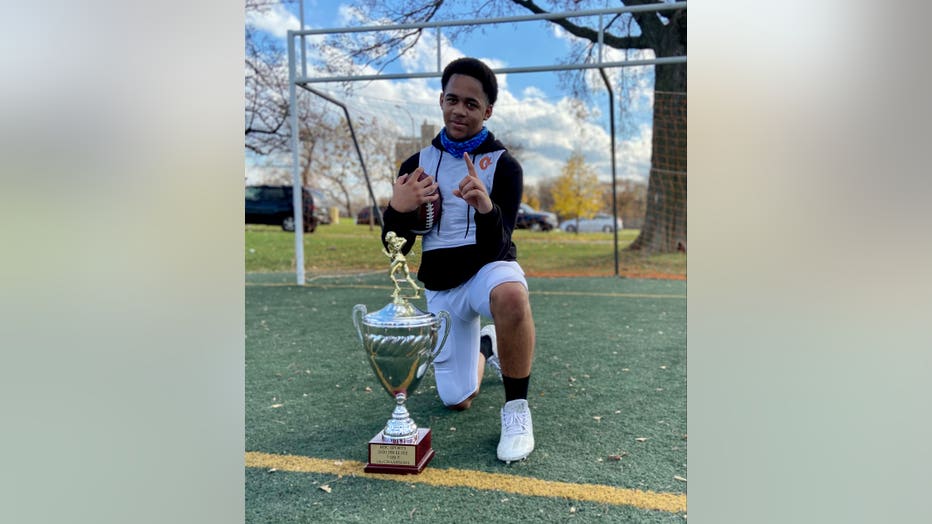 "We want to thank his friends and witnesses who, after hearing the shots, ran to him, comforted him and stayed with him," the father added. "We also want to thank the paramedic/EMTs who cared for him and got him to the hospital, the 12th District police officers who were on scene and the detectives now investigating this heinous crime."

More than half of the nine people hit by gunfire in Chicago Tuesday were 17 or younger. Last week, Javion Ivy and James Sweezer, both 14, were fatally shot hours apart in separate attacks in Englewood and the Near West Side.

"How did our city get here?" Corneal Westbrooks asked. "Have Chicagoans become desensitized to the violence that permeates virtually every corner of our city?"

Caleb played football for the Garfield Park Gators and was a wide-receiver for the Illinois All Stars team, where he met head coach Neil Williams.

"He was a comedian," Williams told the Sun-Times Wednesday. "I called him Sinbad because he reminded me of the comedian. But he didn’t have a clue who Sinbad was. He had to google it to figure out who he was. He was a fun kid."

After a Noble Square teenager was killed walking home from school, his family is calling for an end to senseless killing.