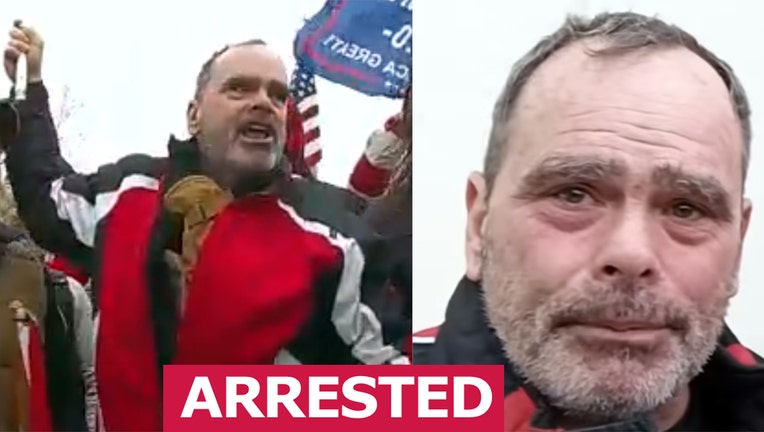 A retired New York Police Department officer and former U.S. Marine was deemed a danger to the community and ordered held without bail Tuesday after his arrest on charges that he attacked a police officer during the Capitol attack in early January.

Thomas Webster, 54, who runs a landscaping business, will remain jailed after surrendering to the FBI and appearing in White Plains federal court, where Assistant U.S. Attorney Benjamin Gianforti said video footage at the Jan. 6 events showed Webster "clear as day" attacking an officer.

Webster's lawyer, James Monroe, said his client will plead not guilty to charges including assaulting or resisting officers with a dangerous weapon, obstruction of law enforcement during civil disorder, engaging in physical violence in a restricted building or grounds with a deadly or dangerous weapon, among other charges.

Gianforti said federal sentencing guidelines would recommend a prison term of at least five years in prison if Webster chose not to go to trial and pleaded guilty to the charges. If convicted at trial, the recommended prison term would be much higher, he said.

Several security officials testified before lawmakers in Congress about the Jan. 6 insurrection at the U.S. Capitol.

The prosecutor said Webster used an aluminum pole that had carried a U.S. Marines Corps flag against an officer on Jan. 6 in an attack captured on multiple video feeds, including bodycam footage from the officer.

"We see the defendant clear as day ... attacking a police officer, first with that aluminum pole that I mentioned, and then with his bare hands," he said.

"You can see him ripping the officer's protective gear off, the gas mask or the helmet that he was wearing at the time, which ... caused the police officer to choke. It cut off his air at least for a short period of time," he said.

Gianforti said the videos also show "a look of pure rage on the defendant's face."

"His teeth are gritted. This is a man who is about to unleash some kind of violence on somebody and, in fact, he did on that poor police officer," the prosecutor said.

Gianforti said Webster admitted carrying a gun to Washington but claimed he didn't bring it to the Capitol attack. The prosecutor said authorities have "every reason" to believe Webster was armed.

Monroe, though, described his client as a father of three children who never fired a shot during a 20-year police career.

He said Webster was participating in first-ever protest and only engaged with the officer after he was punched by him.

But Gianforti said a review of video footage in the 10 minutes before Webster's attack did not show Webster being punched. He dismissed the claim as self serving and "likely fabricated."

In ordering detention for Webster, U.S. Magistrate Judge Andrew E. Krause said it appeared from bodycam footage that Webster came "running up" to the officer just before the attack began. He said he saw no evidence Webster was punched.

Krause praised the right to free speech, but said "what we see in this video ... goes well beyond First Amendment speech and moves into criminal activity."

He called it "disturbing."

In a separate case, the FBI arrested Philip Grillo based on anonymous tips from people saying they saw TV footage of the New York City man participating in the siege. Court papers say investigators also have security video showing Grillo climbing through a broken window "holding a megaphone in his hand" and wearing a Knights of Columbus jacket.

Grillo, 46, was released on $100,000 bond after making a remote court appearance on Tuesday. A message was left with his lawyer.