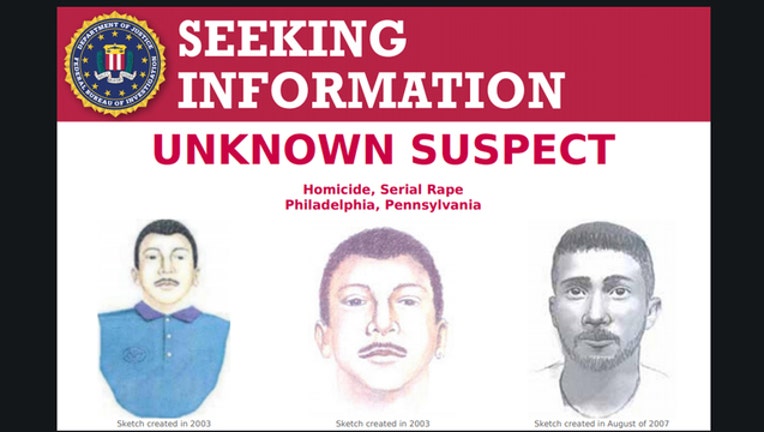 (Courtesy of the Federal Bureau of Investigation)

PHILADELPHIA (FOX 7 Austin) - The Federal Bureau of Investigation is seeking the public's help in investigating a series of rapes and a homicide in Philadelphia in 2003 and 2007.

The FBI circulated sketches of the suspect Sunday afternoon, two from 2003 and one from 2007, as well as a description.

According to the FBI, a female jogger was attacked and raped in the Fairmount Park section of Philadelphia on April 30, 2003. The body of a second female was found in that same section of Philadelphia on July 13, 2003; she had also been raped and last seen jogging in that area. A third female jogger was attacked and stabbed multiple times with a knife in the same area on October 25, 2003. She survived her wounds.

The suspect is described as a late 20s to early 30s white or Hispanic male approximately 5'8" and 150 pounds with olive skin, medium build and short, tight and curly hair. He wore a thin moustache and/or a jaw line beard, has a widow's peak hairline and may wear a hoop earring in his left ear. He may also ride a 10-speed dark metallic English Racer-type bicycle with curved white handlebars.

According to the FBI, at the time of the 2007 attack, he wore a matching mesh sleeveless basketball shirt and shorts in light blue with white stripes on the sides and white edging on the shirt and a gold chain with a cross pendant around his neck. He also was described with scars, possible from burns or stab wounds, on his upper left chest, shoulder and arm.

Anyone with information on the suspect is asked to contact their local FBI office or submit their tips here.