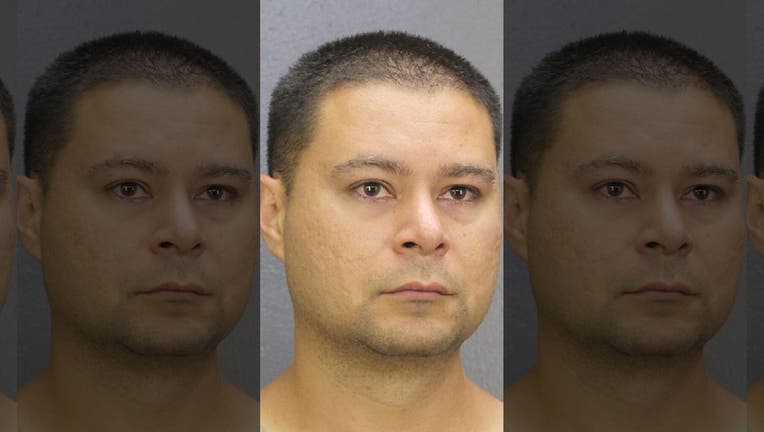 Booking photo for Michael Martinez after being found guilty of forcing a young woman and a young man to run naked to avoid arrest. (Broward County Sheriff's Office)

A Florida cop has been found guilty of forcing a young woman and a young man to run naked to avoid arrest.

“I took my pants off. I took my shirt off,” Remy Riley told the jury Wednesday, Fox 7 Miami reported. “I kind of looked at him like, ‘Is this enough?’ He’s like, ‘That’s it?’”

The jury also heard Riley say that after she took off her underwear and bra, Martinez was “kind of like, ‘Move your hands away from your body so I can see,’” according to the station.

Martinez faces around six years in prison after being found guilty of extortion and unlawful compensation, the Florida Sun-Sentinel reported.

Martinez was accused of threatening to arrest Riley and Kyle Shoulta, 18, on drug and alcohol possession charges after stopping them for running a stop sign on Alligator Alley near the Miccosukee Reservation three years ago.

“I was given a choice of go to jail or run, so I took the choice to run naked,” Shoulta testified, according to the station.

Martinez was fired a year after the incident. He was arrested last year, the station reported.

A lawyer for Martinez did not return the paper’s calls seeking comment.

Martinez chose not to testify in his own defense, according to reports.