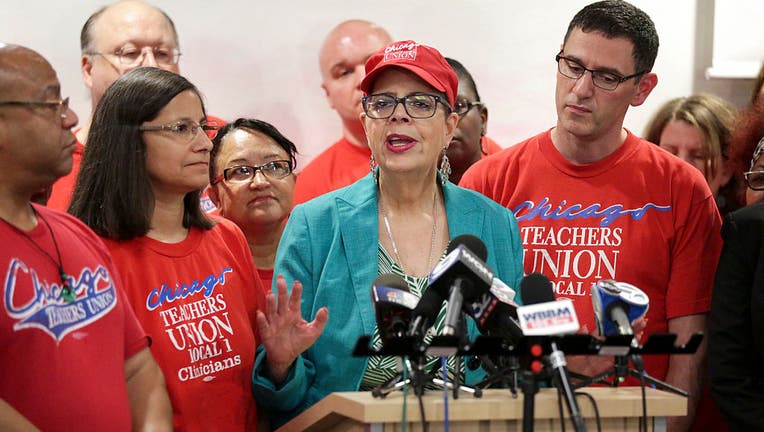 Known for her fiery speaking style, Lewis seriously considered a challenge against then-Mayor Rahm Emanuel before she was diagnosed with brain cancer in 2014. She continued to face health problems, suffering a stroke in 2017 and undergoing brain surgery the following year.

Her longtime spokeswoman and friend Stephanie Gadlin confirmed the death Monday in a statement but did not disclose the cause or circumstances.

Lewis’ tenure as union president saw mass school closings and bitter contract talks. In 2012, she led the first teachers’ strike in 25 years, often going after Emanuel, whom she once described as the "murder mayor" because of the city’s violence.

"She bowed to no one, and gave strength to tens of thousands of Chicago Teachers Union educators who followed her lead, and who live by her principles to this day," the union said in a statement. "But Karen did not just lead our movement. Karen was our movement."

Lewis grew up on the city’s South Side, the child of two public school teachers. She graduated from Dartmouth College, often noting she was the only Black woman in the 1974 graduating class.

She taught chemistry for nearly two decades in Chicago and was active in union leadership. Lewis became union president in 2010 and stepped down in 2018 because of her health.

Lewis’ death drew condolences from numerous leaders, including the city’s current mayor, Lori Lightfoot, and Randi Weingarten, the president of the American Federation of Teachers. On Twitter, Emanuel said that though he and Lewis often disagreed, their "regular conversations were a benefit to me and to the city of Chicago."

In her departure letter from the union in 2018, Lewis urged teachers to keep fighting.

"In my fight against brain cancer, I am reminded through my faith that when storms come, the brave do not jump overboard," she wrote. "They do not abandon ship, nor do they panic. Even if the captain is down and storm clouds are gathering, the rest of the crew must steer the ship on its charted course."