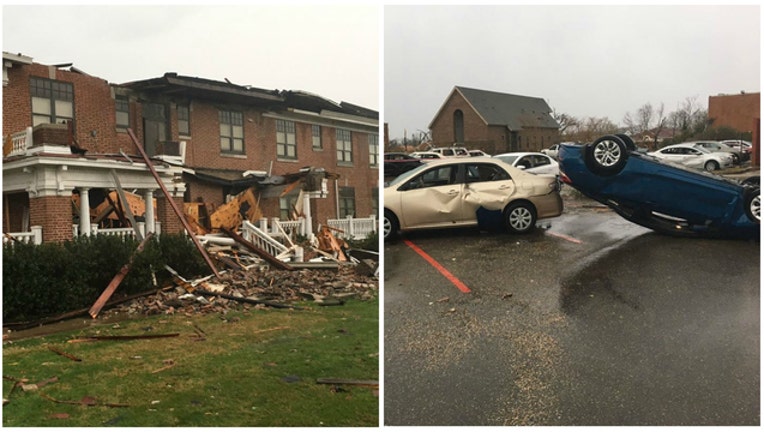 HATTIESBURG, Miss. (AP) -- The Latest on a tornado in southern Mississippi (all times local):

A college in a southern Mississippi town where a tornado struck says it's closing and students are being evacuated.

William Carey University, a Christian university with a campus in Hattiesburg, says on its Twitter feed that the campus is closed until further notice. Its Tradition campus near the coast is still open.

The university reports some students had minor injuries, and some dorms were damaged.

Photos posted on the university's Twitter feed showed vehicles in a parking lot flipped over and parts of a brick building ripped down.

A twister has wreaked havoc on the Hattiesburg area of southern Mississippi.

Photos and television images showed the intensity of the damage.

Four people were killed early Saturday when a tornado ripped through the area.

Cars had been flipped over, sometimes piled on top of each other while parts of houses were ripped into shards of wood and debris.

Once tall trees were ripped from their roots and thrown across roads.

As dawn rose over the city, rescue workers and residents walked down streets strewn with debris and still wet from the storm.

Four people were killed early Saturday when a tornado ripped through the Hattiesburg area, officials in Mississippi said.

The city of Hattiesburg said via its Twitter account that four people had died after a tornado blew through the city and surrounding area.

The city also said via Twitter that Hattiesburg firefighters and police are going door-to-door to try to rescue victims.

Greg Flynn of the Mississippi Emergency Management Agency said "massive damage" was reported in a three-county area that was struck by a tornado at around 4 a.m.