The project is a collaboration between the George Floyd Foundation and Change.org, traveling to five U.S. sites mirroring the route of the 1961 Freedom Rides.

RICHMOND, Va. - A hologram of George Floyd is set to appear at the sites of former Confederate statues across the U.S.

It will travel to five sites this week in North Carolina, Georgia and more, mirroring the route of the 1961 Freedom Rides.

That year, civil rights activists sought to end segregated transportation in the South by taking bus rides, leading to bombings and beatings by angry White protesters and arrests by local authorities, according to the Martin Luther King, Jr. Research and Education Institute at Stanford.

The project is a collaboration between the George Floyd Foundation and Change.org. It aims to replace “sites of racist symbols with one of hope and transformation,” organizers said in a statement.

The hologram forms a 3D image of Floyd out of fireflies and his name in graffiti, reflecting the murals painted nationwide and around the world in his memory. 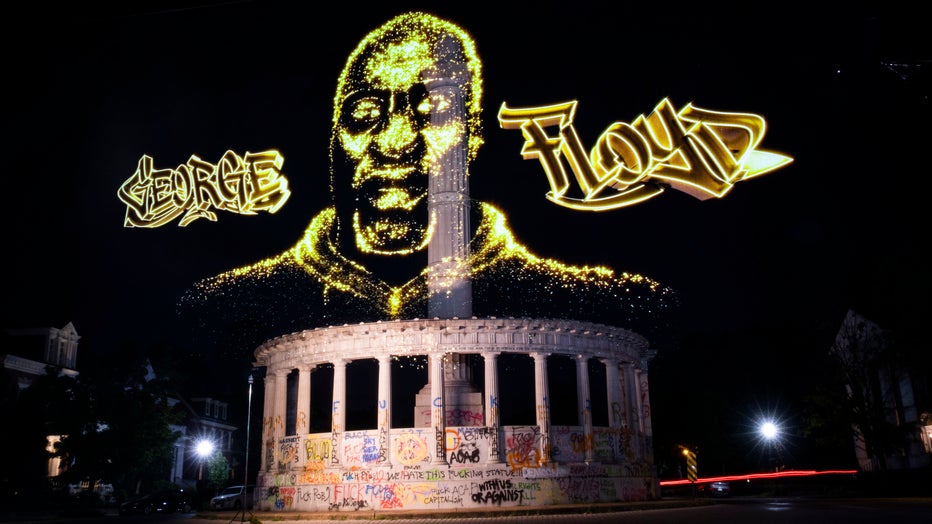 The George Floyd hologram memorial will travel to five stops throughout the week to temporarily replace former Confederate statues “as a symbolic call to continue the fight for racial justice,” organizers said. (Photo credit: Change.org (http://chang

“This project aims to reflect the power and beauty of those millions of voices standing up for change,” Sylvia Rolle, with Change.org, said in the statement.

A Change.org petition demanding justice for Floyd, who died May 25 while in Minneapolis police custody, became the website’s largest petition to date with nearly 20 million signatures.

Floyd died after a White officer pressed his knee on Floyd's neck for several minutes, even as Floyd pleaded that he couldn't breathe. A widely-seen bystander video captured his final moments, igniting nationwide protests over racial injustice and police brutality in America and around the world.

Since Floyd’s death, there has also been a wave of monument removals, name and branding changes and police reforms in some cities.

Floyd’s family held a preview of the installation on July 27 at the Jefferson Davis memorial. Protesters removed the statue of the former president of the Confederacy in June.

“Since the death of my brother George, his face has been seen all over the world,” Rodney Floyd, brother of George Floyd, said. "The hologram will allow my brother's face to be seen as a symbol for change in places where change is needed most.”

RELATED: Details announced for massive 'Get Your Knee Off Our Necks' march for police reform in Washington