FOX 32's legal analyst Larry Yellen weighs in on the sentencing of Derek Chauvin, the former Minneapolis police officer convicted in the death of George Floyd.

TOLEDO, Ohio - A mural in remembrance of George Floyd in Toledo, Ohio, was reduced to rubble after a reported lightning strike.

Witnesses told Toledo Police that a lightning strike destroyed the mural, and doppler radar shows a strike hit at about 4:30 p.m. Tuesday near where the mural was painted.

Photos of the destruction show part of the brick wall reduced to rubble, with fragments of mural still remaining on the wall along its border.

The piece, titled "Take a Breath," was created by local artist David Ross about one year ago in honor of Floyd, who was murdered in Minneapolis last Memorial Day by police officer Derek Chauvin.

Ross said he received threats over the mural and speculated the destruction could have been caused by vandalism and not lightning.

"When I did the mural, there was stuff on the wall that I couldn’t remove and that let me know how strong that structure was," Ross told the Toledo Blade. "The lightning thing, that’s possible, but I know it didn’t just fall."

The Ohio city said it plans to replace the mural and that it is exploring different locations to house it.

One city building inspector said the destruction could have also been due to the deterioration of the wall. He added that inspectors recently found the middle of the wall, where the majority of destruction occurred, had been bowing.

"It was just age. It just came away," inspector Hugh Koogan told the Toledo Blade. "It happens to the older buildings." 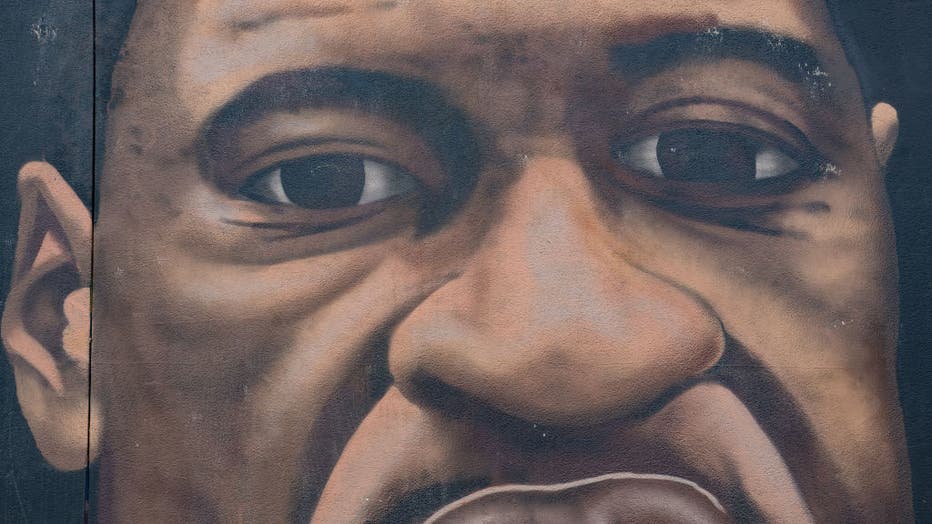 ATLANTA, GA - MAY 25: A mural of George Floyd painted downtown to memorialize the life of George Floyd is shown on the anniversary of his death on May 25, 2021 in Atlanta, Georgia. Floyd's death at the hands of Minneapolis police officer Derek Chauvi

The Toledo Fire and Rescue Department, however, filed the cause of the destruction as a lightning strike.

Murals in remembrance of Floyd have been painted on city and private properties across the nation since his death, with many serving as a gathering point for protesters and vigils.