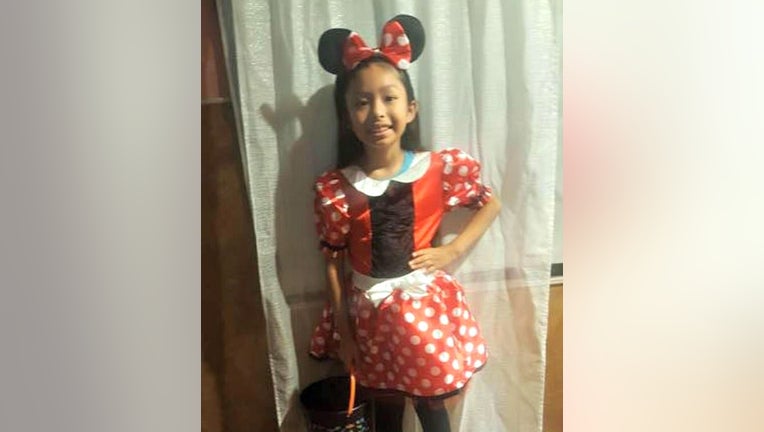 CHICAGO - The 7-year-old girl who was shot in Chicago while trick-or-treating on Halloween is recovering and her family said Monday her condition has been upgraded to fair. They say the young girl is resting in the hospital and watching her favorite TV shows.

The girl, identified only as Gisele, was shot about 5:30 p.m. on Oct. 31 in the Little Village neighborhood when at least two people walked up to another group of people standing in 3700 block of West 26th Street and began firing at them, according to Chicago police.

Gisele was struck by a stray bullet and was rushed to Stroger Hospital in critical condition, police said.

On Sunday, the girl’s family posted the following statement on GoFundMe:

"1. Giselle's health update, she is doing better compared to yesterday. She is able to stay in a seated upright position and was awake for the majority of our visit. The doctor's are slowly removing auxiliary medical equipment. And they hope that soon she will no longer need this medical equipment and will be able to walk once she feels better.

2. During our visit today Giselle was awake watching "Finding Dory", she did not say much but could give small replies when asked by nurses about how she felt. Giselle is looking forward to be able to consume some of her favorite foods since she is currently not able to. Will stop by tomorrow and provide more updates,

3. As of now the campaign has reached it's goal and will no longer be accepting donations. Giselle's father has been added to the campaign as the benefactor of the founds. Her parents cannot believe how generous everyone has been and are very thankful for the support. They still want to maintain some privacy until Giselle is fully healed and ready to head out of the hospital. Once she is, they would feel more comfortable giving statements."

Ian Martinez was handing out candy near a Metro PCS store on the corner of 26th Street and Lawndale Avenue when he heard the gunshots. Gisele was struck in a nearby alley and someone picked her up and took her inside the Metro PCS to wait for paramedics to arrive, he said. She was wearing a red or purple bumblebee costume under her coat when he saw her inside the store laying on the ground.

“She was very pale,” Martinez said. “It’s very tragic. We were [expecting] that it was gonna be a fun day. Things like this are not allowed. They should do more police inspections around this area.”

A judge has ordered that a 15-year-old boy suspected of shooting 7-year-old Gisele should remain in custody.

The Chicago Tribune reports that Judge Patricia Mendoza issued her ruling at a hearing Monday during which prosecutors said they are seeking medical records from the Halloween night shooting on Chicago's West Side.

Prosecutors say the teen was with a group of people that approached a man they believed was a gang member and told him they belonged to a rival gang before the suspect allegedly shot the man in the hand and Gisele with a stray bullet in the neck.

The 15-year-old has not been identified because he's a juvenile.

The Associated Press and Sun-Times Media Wire contributed to this report.