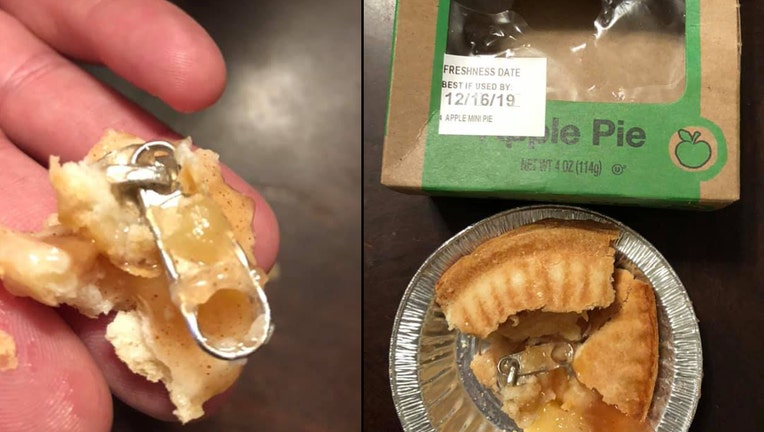 New York mom claims she her daughter nearly choked on a zipper found in a pie. (Kelly Carpenter Marek)

An Upstate New York mother said her daughter choked on a zipper baked into a mini-pie she bought at a Walmart. The pies were made by Massachusetts-based Table Talk Pies.

When Kelly Carpenter Marek’s 10-year-old daughter started choking, the family found out there was a zipper in the apple pie, the Utica mom wrote in a Facebook post Saturday. The post has since received more than 1,000 shares and 42 comments.

“Good thing I was trained in that instead of panicking,” Marek later wrote in the comments, adding that her daughter is now doing well. The news was first reported by Big Frog 104, which said Marek had to perform the Heimlich maneuver to clear her daughter’s throat.

Walmart is investigating the incident and has removed the pies in question from the North Utica Walmart location, the company said in a statement to FOX Business.

“We are committed to providing customers the quality products they expect, and we take this seriously," the company said. "We’re looking into this with the manufacturer and, out of an abundance of caution, [we] have removed the product from the shelves at this store.”

Table Talk Pies did not immediately respond to a request for comment from FOX Business, but President Harry Kokkinis told the New York Post the company puts priority on food safety, including the use of X-ray machines and metal detectors to find foreign bodies.

“Every single pie that is produced in our facility goes through this stringent process,” he said. “That being said, we take the claim from one of our consumers very seriously and are currently conducting an exhaustive investigation into this matter.”

This is not the first time Walmart is embroiled in a choking incident. In July, Georgia-based food company recalled hamburger and hot dog buns sold at several big-brand stores, including Walmart, after finding small plastic objects in production equipment.

Get updates at FoxBusiness.com