The governor's order, which has been in effect since August, was scheduled to expire on Monday. It has now been extended to Nov. 21.

MADISON, Wis. - Gov. Tony Evers extended on Tuesday, Sept. 22 a statewide mask mandate until Nov. 21. This as the state faces soaring coronavirus cases, particularly on college campuses. In fact, Wisconsin now ranks third in the country for new cases per capita. Just one month ago, the Badger State ranked 26th.

The governor's order, which has been in effect since August, was scheduled to expire on Monday. Evers extended the order even as his authority to issue the mandate is being challenged by conservatives in court.

“We continue to learn more about this virus, but what we do know is that we are facing a new and dangerous phase of the COVID-19 pandemic here in Wisconsin,” said Gov. Evers. “We are seeing an alarming increase in cases across our state, especially on campus. We need folks to start taking this seriously, and young people especially—please stay home as much as you are able, skip heading to the bars, and wear a mask whenever you go out. We need your help to stop the spread of this virus, and we all have to do this together.” 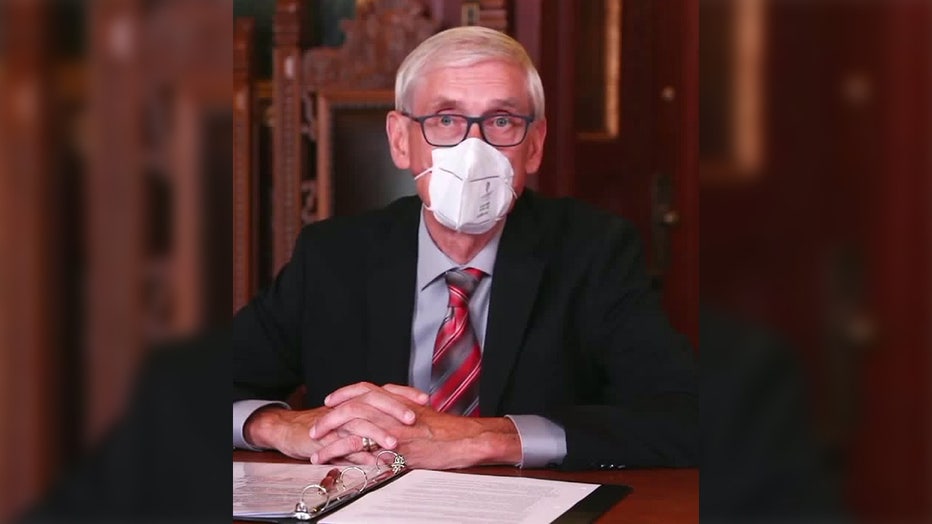 "We are beginning to see an uptick in positive cases of COVID-19 in the city of Milwaukee and that's troubling to me. We were below 5% there for a little bit. I hoped that we would continue to stay there, so I remain concerned about that," said Milwaukee Mayor Tom Barrett.

The executive order lists eight cities in Wisconsin now ranking among the 20 cities in the country with the fastest growth of cases. They include La Crosse, Whitewater, Green Bay, Beaver Dam, Oshkosh, Platteville, Appleton, and Madison. Six of those cities have college campuses.

In total, nearly 102,500 people have tested positive for COVID-19 in Wisconsin and there have been 1,244 deaths, according to the state Department of Health Services.

“The current surge among young people is concerning, but it is important to remember that this increase in cases is not confined to college campuses,” said Department of Health Services Secretary-designee Andrea Palm. “Students come to these campuses from across the state, and we worry about the effect their return from an area with a high infection rate could have on their home communities. That is why it is imperative we take action to curb transmission now – to protect residents of Wisconsin in every corner of the state.”

Despite the surge of cases on University of Wisconsin campuses, Evers has stood by university leaders' decision to open dorms and allow in-person instruction. But as the virus spread quickly among students, campuses across the state have had to quarantine dorms, fraternity and sorority houses and temporarily shift to online-only classes.

"For someone who claims to be following the science, Governor Evers is ignoring his own data and the results of his mandatory mask experiment.

"According to Evers’ third COVID Emergency Order, Wisconsin’s COVID infection rate has decreased or remained flat for nearly every age group since early July, more than a month before his original mask order. In addition, Wisconsin’s recent spike in COVID infections is almost entirely driven by 18-24 year olds on college campuses and has exclusively occurred while Evers’ mask mandate has been in effect.

"Instead of following the science and the data, Evers’ is once again continuing his “one size fits all” approach to the virus, doubling down on a strategy that has proven ineffective for the age group driving the COVID-infection spike.

"I remain ready to vote to repeal this mask mandate."

“I opposed Governor Evers’ second emergency order and continue to stand ready to rescind that order and Executive Order #90, which was issued today.  Wisconsin citizens elected not only a Governor two years ago, but also a State Legislature and it is their expectation and mine that we would act quickly to end this unprecedented government overreach by Governor Evers.  A single emergency order at the onset of this situation may have been appropriate, but Governor Evers ongoing desire to exercise unilateral control is unlawful and must be ended.”

“Governor Evers used the trajectory of positive cases to justify his second emergency order, but this same metric shows no benefit in preventing the spread of COVID-19 after seven weeks. Fortunately, Wisconsin’s COVID-19 related hospitalizations have remained under control, and Wisconsin’s COVID-19 death rate remains well below that of our neighboring states, and most states throughout the country. Many other localities, states, and countries had similarly underwhelming experiences with their own mask mandates prior to Governor Evers’ issuing his initial mask mandate, regardless of the level of public compliance.”

“A statewide approach to COVID-19 has always been a bad idea.  The situation continues to vary greatly from region to region.  I firmly believe local governments, businesses and families will achieve better results if they are able to evaluate their needs and act accordingly rather than following a one-size-fits-all directive from Governor Evers.  The Legislature must convene and rescind this unlawful order to ensure our communities have that option.”

"Thank you, Governor Tony Evers, for doing what you can to save lives as this pandemic rages on! #MaskUpWisconsin"

“As I expressed in my July 31st press release, Wisconsin’s governor continues to trample our State Constitution, overstepping his authority by issuing continual public health emergencies that have the force of law for 60-days. Today, he once again thumbed his nose at the separation of powers and the will of Wisconsinites by giving himself an additional period of unbridled, dictatorial authority. True to my promise to the many constituents who have contacted me in distress over the governor’s behavior, I stand today to fight against this repeated power grab.

“I call on Assembly and Senate leadership and my legislative colleagues to take legal action, fighting the governor’s overreach. It is time we take back the power given to the legislature in the State Constitution and end the governor’s repeated power grab.

“It is abundantly clear that this governor is operating far outside the intent of this law, thus damaging the wellbeing of the citizenry of this state. The past two mandates issued by this governor fall well outside the definitions set forth in Section 323.02(16). A third, unfounded mandate is completely unacceptable.

“We have been fortunate to learn much about COVID-19 since it first became a grave concern to us over 6 months ago. Identification of at-risk demographics, prevention, and treatment have transformed this illness so that it no longer comports with the definition of an illness that has a high possibility of a ‘large number of deaths or serious or long-term disabilities among humans.’

“It is past time for our Legislature to do the right thing by fighting this illegal overreach by a governor who so grossly disrespects and disregards the Wisconsin Constitution.”

"Keep wearing your masks, Wisconsin! Thank you Governor Tony Evers for recognizing the seriousness of our state's rising cases of COVID-19 and taking action!"

“WMC has and continues to encourage the use of masks in confined spaces as a best practice recommended by the CDC and OSHA. However, WMC renews its yet unanswered request for the governor and DHS to clarify and amend the mask order in recognition that a one-size fits all approach doesn’t work for every Wisconsin business.”

“Governor Evers just issued his second illegal health emergency order. The Supreme Court ruled that he is required to work with the legislature after his first 60-day Emergency Order expired. He has again ignored the Supreme Court ruling.

"I will remind the Governor once again that the danger has never been with overall case count, but with ensuring that our hospitals have the capacity to treat those who need care. The bottleneck has always been the availability of ICU beds. I am in agreement that if we approach maximum healthcare capacity, the government has the responsibility to step in and protect the general public.

"However, the truth is that the healthcare capacity in the state is not at risk. Our statewide capacity for ICU beds is around 1,400. Meanwhile, COVID cases that require the ICU have been hovering around 100 since June.

"There is not a scientific consensus that using face coverings have been proven to stop the spread of COVID. In the place of evidence, face masks have become a politicized mental placebo.

"The truth is that this governor is not making decisions based on what is best for Wisconsin, but on what Democratic leadership is telling him to do from Washington DC. It is time to end the dictatorial power grabs of Governor Evers. I implore my colleagues to step up and pass a resolution dissolving his illegal order."

“I am astonished by Governor Evers’ recurrent disregard for the Wisconsin State Constitution and the limits of his own authority as governor. Despite a Supreme Court ruling this spring making it clear that the Governor must work with the Legislature if he wants to continue imposing restrictive orders and mandates, Governor Evers has once again chosen to circumvent the legislative branch entirely, ordering whatever he pleases with complete indifference for the rule of law in our state. I remain unequivocally opposed to yet another illegal order and statewide mask mandate.

“I am calling on my colleagues and legislative leaders in the Assembly to join me in standing against the Governor’s latest overstep of power and taking swift legal action to restore law and order in our state. I stand ready and willing to do what needs to be done to overturn these orders and put an immediate stop to Governor Evers’ continued abuse of power.”

"I am outraged that Gov. Evers has extended the statewide mask mandate. I wish I could say that I am surprised, but I am not. I urged the legislature to fight this mandate back in July and to stand with me to make it clear that we do not support this. We need to stop Gov. Evers’ power grab and return our government to the rule of law.

"I am calling on my Assembly legislative leaders to immediately call the Wisconsin State Assembly into session to overturn Executive Order # 90 and Emergency Order #1. We cannot sit idly by and allow this infringement on personal rights to continue.

"I stand ready and willing to fight this mandate and end this policy."