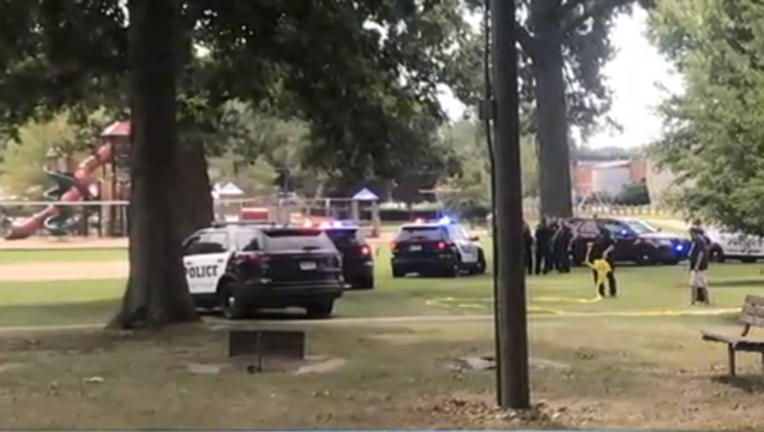 A grandfather was stabbed in a Michigan park during his grandchild's first birthday park, reports said. (WJBK)

(FoxNews.com) - A Michigan grandfather at his grandchild’s first birthday party in a park was stabbed to death Saturday after he approached a man and told him to stop doing drugs in front of the children, reports said.

Police were called to Grant Park in Utica after receiving calls about a stabbing, WXYZ reported. The grandfather was at the park for a first birthday celebration when he approached a man sitting on a bench and asked him to stop doing drugs while children were playing in the park. The grandfather, who was not identified, was stabbed at least 15 times.

Police arrived at the scene and pronounced the man dead. The alleged attacker was then arrested, FOX2 reported.

Witnesses told Macomb Daily that an “enraged” man at the park had attacked the grandfather in front of his family.

"He was enraged, he seemed like he had the strength of the Tasmanian devil," said Amanda Pasho, who lives across the street where the fatal stabbing occurred. "My heart goes out to the family of that poor man. I can't believe this happened in front of them."

Pasho recalled seeing the attacker hold a machete-like weapon up and plunge it into the grandfather’s body.

"(The victim) fell to the ground, he had blood all over him," Pasho said. "He had his arms up to fend off the man from stabbing him. The man put his knee in the guy's abdomen to hold him down and then put his arm across his face and began stabbing him with a knife, like non-stop, just jabbing at him with the knife."

Other residents told the newspaper that the attacker had a box of whippets, canisters with nitrous oxide that could cause hallucinations if inhaled.