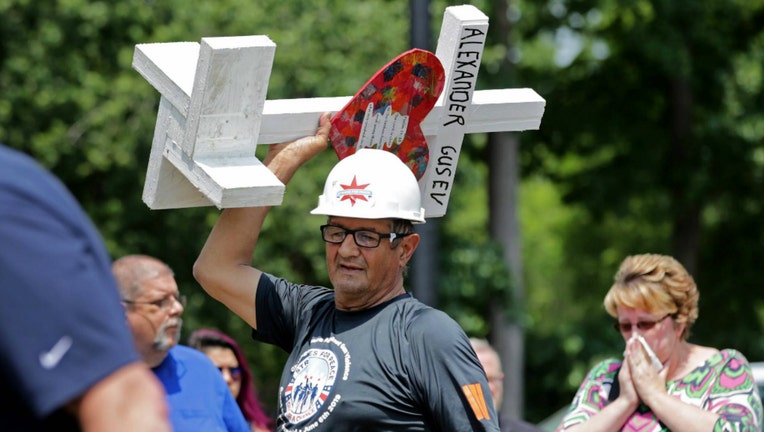 Retired carpenter Greg Zanis of Aurora, Illinois, places one of his hand-made crosses for the 12 victims of a mass shooting at a makeshift memorial at the Municipal Center June 02, 2019 in Virginia Beach, Virginia. Eleven city employees and one priva

CHICAGO - An Aurora man who has dedicated more than two decades of his life to making wooden crosses for victims of tragedy is retiring.

In a Facebook post, Zanis' daughter says his ministry has taken a financial and personal toll on their family, and it's time for her dad to take a break.

"My dad Greg Zanis will no longer be doing his ministry Crosses For Losses. He will be retiring. He asked me to thank everyone for their support. I also wanted to inform everyone again that the Facebook for Greg is not a real account. Please do not donate to that page. It has been reported and we are hoping it will be shut down.

My dad has been placing crosses since 1996. Ge has placed over 27,000 memorials for all including different religions. His mission was to show love and not force his faith on anyone. The Cross was his symbol of hope, love and faith.

This ministry has taken a huge toll on our family, from missing my dad and worrying about him while he was away to the financial burden it caused on our family. I am extremely proud of him for following his heart but I am more proud of him for realizing it is time for him to take a break and focus on himself."

“I leave a piece of my heart behind each time I go,” he said.

In 2016 he made more than 700 crosses that were carried along Michigan Avenue in Chicago to honor each person who had been killed that year.

Earlier this year, Zanis found himself making crosses for his very own hometown of Aurora, Illinois, after a Henry Pratt Co. employee opened fire on his coworkers.

“After Orlando, it never stopped,” Zanis said of the mass shootings. “The country had me on the road for a while every week. I have driven 850,000 miles to put up crosses. I slept in my truck and never had the money to cover what I was doing.”

With donations from time to time, Zanis mainly relied on his own resources to build the crosses.

Zanis hopes to pass on his Crosses for Losses ministry to the nonprofit Lutheran Church Charities of Northbrook.

“I feel is is not the end of the ministry. It is the end of me doing it,” he said.

Zanis started making the crosses after his father-in-law was murdered in 1996.