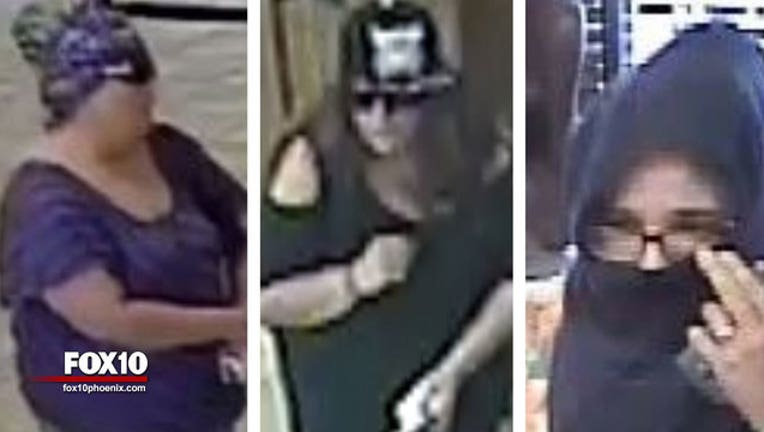 PHOENIX - The "Grimace Bandit" is suspected of robbing three banks in nine days, the most recent crime happened in Goodyear on Monday. The suspect earned the nickname because she wore a purple shirt during the first robbery and a purple scarf in the second robbery.

According to the FBI, the suspect entered the Chase Bank in Phoenix near 30th and Peoria Avenues on September 30th at around 12:26 p.m. She approached a teller, presented a demand note and verbally demanded money. The suspect was given the funds and fled the area on foot.

Just before 7:00 p.m. on October 9th, authorities say the same suspect robbed MidFirst Bank located near Litchfield and Indian School Roads in Goodyear. The suspect left a suspicious package inside the bank, then fled the scene. The FBI says the package was later determined not to be a threat.

The first robbery took place on October 6th, around 3:45 p.m. The suspect entered the BMO Harris Bank near 29th Avenue and Bell Road and approached a teller. A purse was placed on the counter by the woman, who then handed the teller a note demanding money. After the suspect obtained the currency, she fled the area in an unknown direction.

The suspect was described as having reddish, shoulder-length, curly hair during the October 9th robbery. The woman was wearing a green shirt with a pink bra, black leggings, a black hat and large sunglasses.

Officials say during the October 6th robbery, the suspect wore a purple scarf or burka covering her head and face, dark-framed prescription-style glasses and a floral top.

Authorities say the suspect should be considered armed and dangerous. If you have any information about the robberies, call the FBI at 623-466-1999. You can also submit tips at tips.fbi.gov or call Silent Witness at 480-WITNESS. You can remain anonymous and receive a cash award for tips leading to an arrest or indictment.