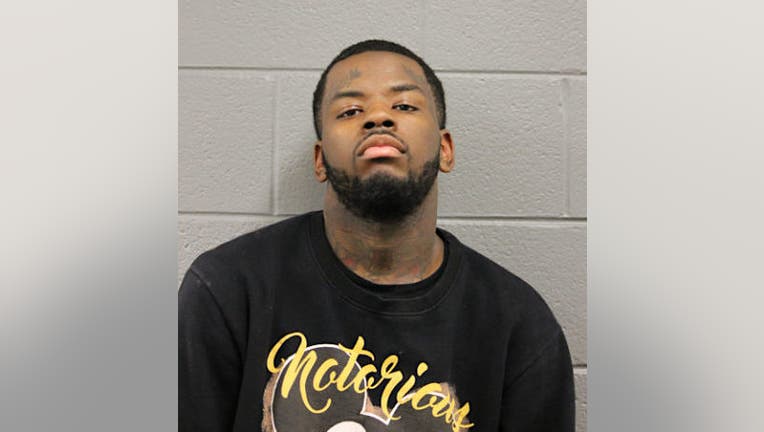 CHICAGO - A man who allegedly shot and killed someone last year in East Garfield Park allegedly abandoned his getaway car four blocks from the scene with his wallet and murder weapon inside, prosecutors said.

Tevin Johnson, 23, faces a first-degree murder charge in the March 24, 2019, slaying of Brandon Frazier, according to the Cook County state’s attorney’s office.

Johnson allegedly drove up to Frazier’s vehicle in the 3600 block of West Garfield Square Drive and let off eight gunshots, prosecutors said. Both men were the sole occupants of their cars.

The gunfire struck Frazier four times in his temple and his chest, killing him at the scene, prosecutors said.

Home surveillance video shows Johnson’s gray Infiniti pull up to Frazier’s vehicle, and then drive off, prosecutors said. Chicago police POD surveillance cameras tracked the Infiniti to the 3600 block of West Iowa Street, where it was parked two minutes later.

Additional tests show that most of the DNA found on the gun belongs to Johnson, although the gun had two other people’s DNA, too, prosecutors said.

Between the fatal shooting and Johnson’s arrest this month, Johnson was charged with unauthorized use of a weapon and aggravated fleeing, prosecutors said.

His private attorney, David Gaeger, said Johnson was arrested several months ago in connection to the murder, but was released earlier without charges. Gaeger also pointed out that all of the evidence in the case is circumstantial, and does not directly link Johnson to the shooting.

Johnson, of the Austin neighborhood, worked as a ramp attendant at O’Hare Airport, and is a graduate of John Marshall High School, Gaeger said.

Judge David Navarro took note that the prosecution’s evidence is circumstantial, but said the evidence should not be dismissed because of that.

Navarro ordered Johnson held without bail, and set his next court date for May 27.