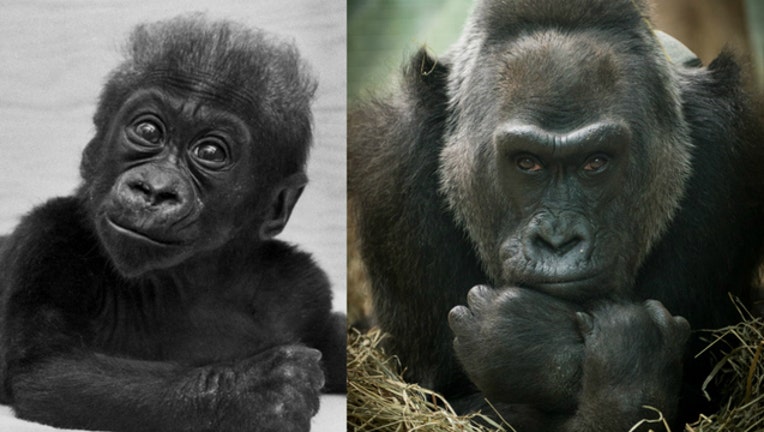 Then and now: Colo, who in 1956 was the first gorilla born in captivity, just celebrated her 60th birthday. (Photo Credit: Columbus Zoo and Aquarium)

She's Colo, the nation's oldest living gorilla, and she turned 60 on Thursday at the Columbus Zoo and Aquarium.

Colo was the first gorilla in the world born in a zoo and has surpassed the usual life expectancy of captive gorillas by two decades. Her longevity is putting a spotlight on the medical care, nutrition and up-to-date therapeutic techniques that are helping lengthen zoo animals' lives.

"Colo just epitomizes the advances that zoos have made, going all the way back to her birth at Columbus," said Dr. Tom Meehan, vice president for veterinary services at Chicago's Brookfield Zoo and veterinary adviser to a national gorilla species survival plan.

Hundreds of people gathered at the zoo Thursday to see Colo, singing "Happy Birthday" moments before the gorilla ambled into an enclosure decorated with multicolored construction paper chains and filled with cakes such as squash and beet and cornbread with mashed potato parsley frosting.

Among the first in line was Pam Schlereth of Columbus, who at 63 was just a little girl when her father brought her to see the newborn Colo in a gorilla incubator in 1956.

"It's a tribute to the zoo that she's alive at 60 years old," Schlereth said.

Colo represents so much to the zoo, Tom Stalf, president of the zoo, told the crowd. "It's all about connecting people and wildlife," he said.

Colo is one of several elderly gorillas around the country. The oldest known living male gorilla, Ozzie, is 55 years old and lives at the Atlanta Zoo, which has a geriatric gorilla specialty.

At the National Zoo in Washington, Shanthi, a 42-year-old Asian elephant with arthritis, receives osteoarthritis therapy and was recently fitted with specially crafted front foot boots to help her feet heal as medications are applied.

In Oakland, California, Tiki, a 27-year-old giraffe and one of the oldest in the nation, gets foot care, massage therapy, acupuncture and chiropractic care, along with traditional veterinary medicine. Gao Gao, a 26-year-old male panda at the San Diego Zoo with a heart condition, periodically undergoes cardiac ultrasounds.

"Geriatrics is probably one of our most common medical challenges that we face in a zoo situation," said Dr. Keith Hinshaw, director of animal health at the Philadelphia Zoo. "So pretty much anything that you could imagine would happen with an older person is going to happen eventually with any animal."

That's up to and including medication: JJ, a 45-year-old orangutan at the Toledo Zoo, is on the human heart medicines carvedilol and Lisinopril, along with pain and orthopedic medications. He also takes Metamucil.

Colo, a western lowland gorilla, holds several other records. On her 56th birthday in 2012, she exceeded the record for longest-lived gorilla. On Thursday, she surpasses the median life expectancy for female gorillas in human care (37.5 years) by more than two decades.

Coldilocks, a 36-year-old polar bear at the Philadelphia Zoo and considered the oldest polar bear in the U.S. The bears' typical lifespan in captivity is 23 years. The zoo says treating her early for kidney disease appears to have helped prolong her life.

Elly, an eastern black rhino at the San Francisco Zoo estimated to be 46 years old, is the oldest of her species in North America. She has had 14 calves, and her offspring have produced 15 grandchildren, 6 great-grandchildren and 1 great-great-grandchild.

Packy, an Asian elephant at the Oregon Zoo, and at 54, the oldest male of his species in North America. The zoo says Packy, born in 1962, became the first elephant to be born in the Western Hemisphere in 44 years.

Little Mama, a chimpanzee living at Lion Country Safari in Loxahatchee, Florida, with an estimated age in her late 70s. She takes allergy medicine, iron supplements and omega 3 multivitamins, and has been trained to accept a nebulizer treatment for coughing.

Emerson, a Galapagos tortoise at the Toledo Zoo in Ohio, whose age is estimated at about 100.

Andrew Welsh-Huggins can be reached on Twitter at https://twitter.com/awhcolumbus. His work can be found at http://bigstory.ap.org/content/andrew-welsh-huggins

This story has been corrected to show that Tiki the giraffe is in Oakland, California, not San Francisco.