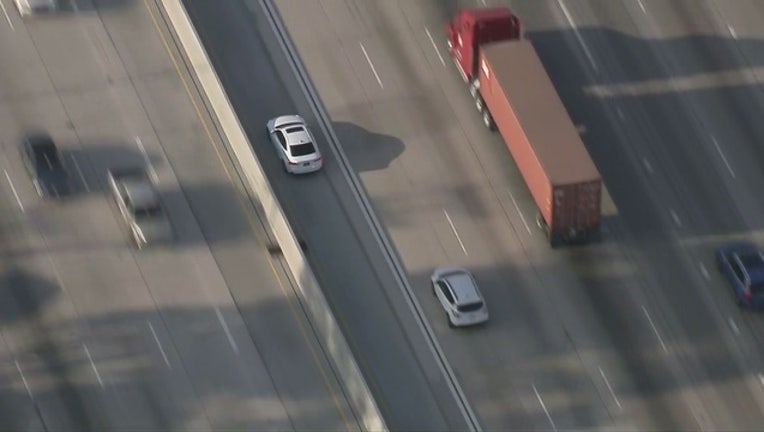 MONTEREY PARK, CA (FOX 11) - A driver in a white Lexus reported stolen in Rosemead from a Los Angeles Port Police officer led authorities on a chase Friday that topped 100 mph as it stretched from Monterey Park to Mission Hills.

Monterey Park police notified the California Highway Patrol about 2:30 p.m. that they were in pursuit of the suspect, who exceeded 100 mph along the San Gabriel River (605), Foothill (210) and Ventura (134) freeways before heading north on the Golden State (5) Freeway.

About 3:15 p.m., the vehicle began slowing as it was driven in the freeway carpool lane, allowing a CHP officer in a cruiser to execute a PIT maneuver that sent the Lexus into the right-hand freeway wall just north of Rinaldi Street, where officers with guns drawn surrounded the car.

The suspect exited the vehicle as ordered and was taken into custody.

Sheriff's Capt. Darren Harris told ABC7 the Lexus belongs to a Los Angeles Port Police officer and it was reported to have a gun inside when it was stolen Thursday night in Rosemead.

It was not immediately clear if a gun was recovered from the vehicle.