CHICAGO - Witnesses described pandemonium after a mass shooting Monday at a July 4 parade that killed at least six people and injured 34 in the upscale Chicago suburb of Highland Park, according to reports.

Chesler and his girlfriend were watching the parade when a gunman positioned on a roof opened fire at about 10:14 a.m.

"We heard 15 or 16 rapid-fire shots, which we thought were fireworks, but all of a sudden, like two seconds afterwards, people started running and screaming, ‘Gunfire!’" said Chesler, who has attended the parade nine years in a row. "It was total chaos. My girlfriend and I were almost trampled by dozens of people trying to get out of the way."

The main parade had just begun when the shooter allegedly used a high-powered rifle to spray the crowd with bullets from a nearby rooftop, Highland Park Police Commander Chris O'Neill told reporters Monday at a press conference.

New video shows the moment a gunman opened fire on a crowd of people at a Fourth of July parade in Highland Park, Illinois on Monday morning.

Police described the shooting as random, and the suspect, who is still at large, as a White male, aged 18 to 20, with longish black hair and a slight build. He left the weapon at the scene, police said.

After the crowd dispersed, Chesler, who is a retired Chicago teacher, walked west with his girlfriend. "Paramedics were working on at least three to four people who had been shot or possibly injured when they were scrambling to get out of the way," he said. "You saw people absolutely terrified. People were crying."

Highland Park resident Alexander Sandoval, 39, told the Chicago Sun-Times that he got up before 7 a.m. to set up lawn chairs and a blanket in front of the main stage of the parade for his family.

"We saw the Navy's marchers and float pass by, and, when I first heard the gunshots, I thought it was them saluting the flag and shooting blanks," he said. "But then I saw people starting to run, and the shots kept going. We started running."

In the chaos, Sandoval and his 5-year-old son fled in one direction and his partner, Amairani Garcia, and her 6-year-old daughter fled in another. 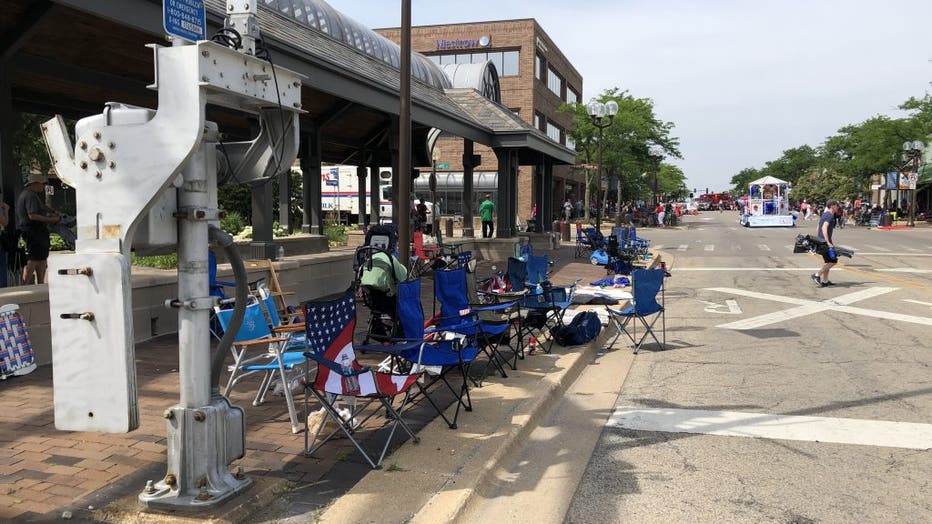 Terrified parade-goers left behind chairs, personal belongings as they fled

"I grabbed my son and tried to break into one of the local buildings, but I couldn’t," he told the newspaper. "I kept running and ran into an alley and put my son in a garbage dumpster, so he could be safe."

After the gunfire subsided, Sandoval searched for his partner and stepdaughter, finding the ground strewn with bodies. "I saw a little boy who was shot being carried away," he said.  "It was just terror."

Gina Troiani and her 5-year-old son were about to join the parade route with his daycare class. He was riding a bike decorated with red and blue curled ribbons and his classmates clutched American flags. When the gunfire started, she thought it was fireworks until someone started yelling, "Shooter!"

A woman who was attending the Highland Park July 4th parade with her family describes the moment she saw the gunman opening fire on the crowded street.

Illinois State Senator Julie Morrison told CBS Chicago she and her family, riding in a convertible, had just entered a ramp to join the parade when they heard a popping sound they thought was fireworks.

"All of a sudden a couple of women started running — and then it was like almost a wave of people, and they were crying and screaming, and they said there's an active shooter and people have been shot," she recalled. "[It] was like something you'd see in a movie."

Law-enforcement agencies are searching for the suspect.