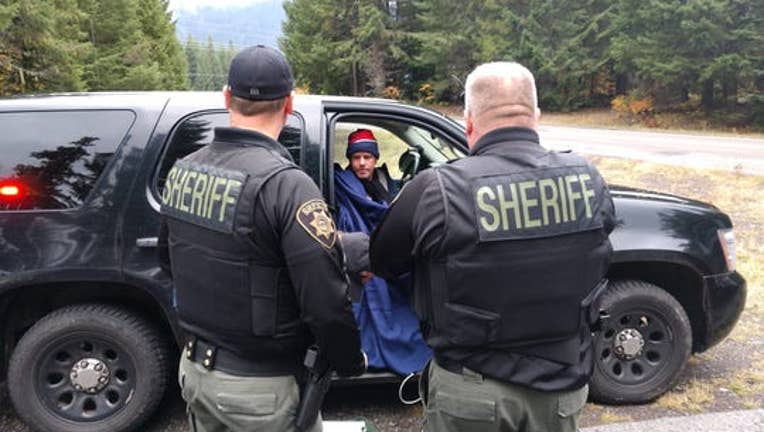 SALEM, Ore. - Robert Campbell was thoroughly soaked, shivering, his wet sleeping bag covering him in the only shelter he could find -- a pit toilet in a closed campground -- after getting lost in a snowstorm in Oregon while hiking the Pacific Crest Trail.

Campbell was saved on Friday by a search team from the local sheriff's department, who found his footprints in the snow. Heavy snow was forecast through Saturday evening in the Cascade Range.

"I really think I owe them my life because ... I couldn't have made it another night. My sleeping bag and tent are just completely soaked and probably ruined and I have no dry clothes," Campbell said from a motel Friday night in Detroit, Oregon. His voice hoarse, he noted there were blue spots on one foot and his toenails were blue.

Campbell, a native of the Philadelphia area, started hiking the famed Pacific Crest Trail on the U.S.-Mexican border on May 4, determined to make it all the way to the other end, on the Canadian border, 2,650 miles (4,265 kilometers) away. Last year, he hiked the Appalachian Trail from Georgia to Maine, he said. Those who walk the entire distance of these multi-state trails are called thru-hikers.

Campbell's troubles began Wednesday night. Snow was falling, the first winter storm of the season. He stayed awake all night, punching the interior tent walls to knock the accumulating snow off.

As he hiked on Thursday, the snow buried the trail. A smartphone app that was supposed to show the way didn't help. Straying miles off the trail and into a boulder field, he stepped into a crack hidden in the snow, trapping his foot. He struggled for five minutes and had to unlace his shoe before he could free himself, Campbell said.    Many take up the challenge to hike the PCT. Cheryl Strayed was one. She wrote a book, "Wild," about her adventure that was made into a movie starring Reese Witherspoon.

"Sometimes it seemed that the Pacific Crest Trail was one long mountain I was ascending," Strayed wrote. "At times I almost wept with the relentlessness of it, my muscles and lungs searing with the effort."

Hikers have a strong sense of camaraderie. The Trek website shows thru-hikers triumphantly standing on a wooden sign marking the trail's northern terminus.    Some perish making the attempt.

In 2017, heavy snowfall made conditions treacherous. The body of Chaocui Wang, who had quit her job in Shanghai, China, to hike the trail, was found in a creek made swift by melting snowpack. Thru-hiker Rika Moria, of Osaka Japan, was found dead in a river. Hiker Marvin Novo, of Turlock, California, died from apparent heat-related causes. In February, another hiker died after falling on ice.

Hiker Finn Bastian, of Preetz, Germany, was killed this year by a falling tree.

Campbell, scared after being temporarily trapped and realizing he needing help, called 911 on Thursday and said he was lost. Then the line dropped. There was no phone signal. The Marion County Sheriff's Office sent out a search and rescue team, putting out a notice saying "the area of focus is very expansive and there is limited information available."

Campbell, meanwhile, stumbled into the campground. Tire tracks gave hope that some lingering vacationers might be present, but the place was empty. Cold, wet and exhausted, he ducked into a pit toilet, the only available shelter. On Friday afternoon, searchers drove by the campground and found his footprints.

"They just went way above and beyond. I'm just eternally grateful," Campbell said.

He intends to finish the hike.

"Oh yeah, Canada or bust," he said. "I'm going to be doing it a lot more smartly. Any chance of snow, I'm not going to even mess around with it."