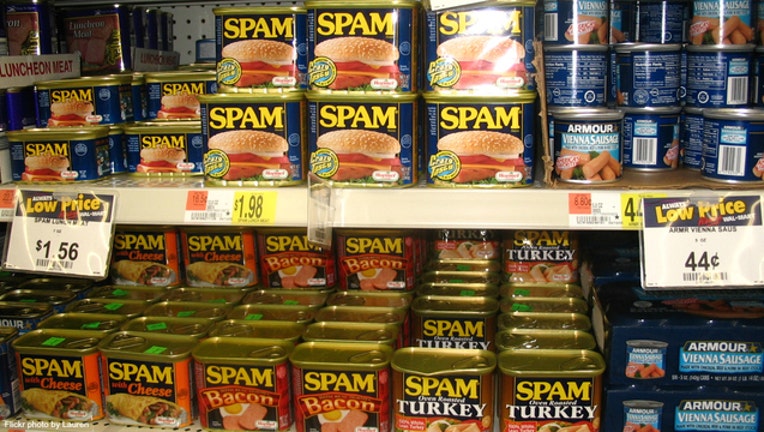 HONOLULU (AP) - Cans of Spam have become a common item that's being stolen from Honolulu stores and then sold on the streets for quick cash, according to authorities.

Ra Long, who owns a convenience store in the city, said shoplifters have typically targeted alcohol in the past, but recently more cans of Spam have gone missing, Hawaii News Now reported .

"I mean you try to keep an eye on it, but if they run, you just can't leave the counter and chase them," Long said. "So you just got to take the hit."

Honolulu police said they took a report of a man lifting a case of the canned meat from a store earlier this month.

Kimo Carvalho, a spokesman for the Institute for Human Services, said people are stealing Spam because it's easy to sell. "It's quick cash for quick drug money," Carvalho said.

Hawaiians eat millions of cans of Spam a year, the nation's highest per-capita consumption of the processed meat, which is cobbled together from a mixture of pork shoulder, ham, sugar and salt.

The state's love affair with Spam began during World War II, when rationing created just the right conditions for the rise of a meat that needs no refrigeration and has a remarkably long shelf life (indefinitely, the company says).

Ann Kondo Corum, who grew up in Hawaii in the 1950s and has written several Spam-inspired cookbooks, has attributed Spam's popularity partly to Hawaii's large Asian population. "Asians eat a lot of rice. Spam is salty, and it goes well with rice," she told The Associated Press in 2009.