WASHINGTON - Former President Donald Trump’s impeachment trial came to an abrupt standstill Saturday morning after a majority of senators voted to consider calling witnesses about the deadly storming of the Capitol.

Under Senate rules for the trial, it appears debate and votes on potential witnesses could be allowed, potentially delaying the final vote.

During a brief debate prior to the vote over whether the Senate would call witnesses, the Senate chamber was scolded by President Pro Tempore Patrick Leahy after laughing during remarks from Trump impeachment lawyer Michael van der Veen

He suggested House Speaker Nancy Pelosi, D-CA, should be subpoenaed, as well as Vice President Kamala Harris. But he refused to hold such depositions virtually.

"We didn’t do these hearings by Zoom," van der Veen said as he pounded the podium. "These depositions should be done in person, in my office, in Philadelphia."

A roar of laughter filled the chamber, which visibly caught van der Veen off guard. Even so, he powered through with his fiery delivery.

"I don’t know why you’re laughing," he told the chamber.

Leahy interjected and reminded the Senate that they "will have order in the chamber in these proceedings."

Van der Veen took a moment to gather himself before addressing the subdued chamber once more.

"I haven’t laughed at any of you," he said. "And there’s nothing laughable here." 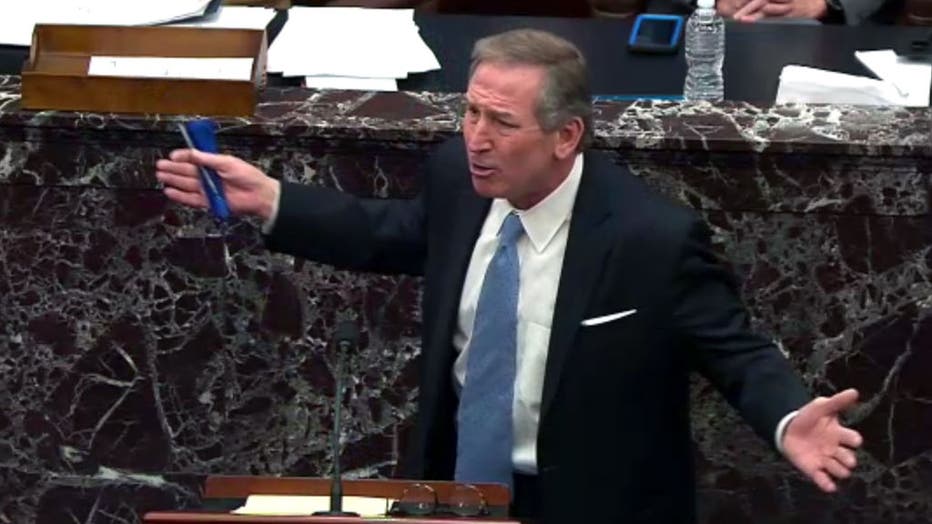 In the end, the Senate voted 55-45 in favor of the House managers, which means the trial that was expected to wrap up Saturday could be potentially extended as more witnesses and testimony are considered.

House prosecutors wanted to hear from a Republican congresswoman who has said she was aware of a conversation Trump had with the House GOP leader as rioters were ransacking the Capitol over the election results.

Rep. Jamie Herrera Beutler of Washington has widely discussed her reported conversation with House Republican leader Kevin McCarthy, who had called on Trump to stop the attack by his supporters.

Later on Saturday, the Senate reached a deal to skip witness testimony and the trial resumed with closing arguments.