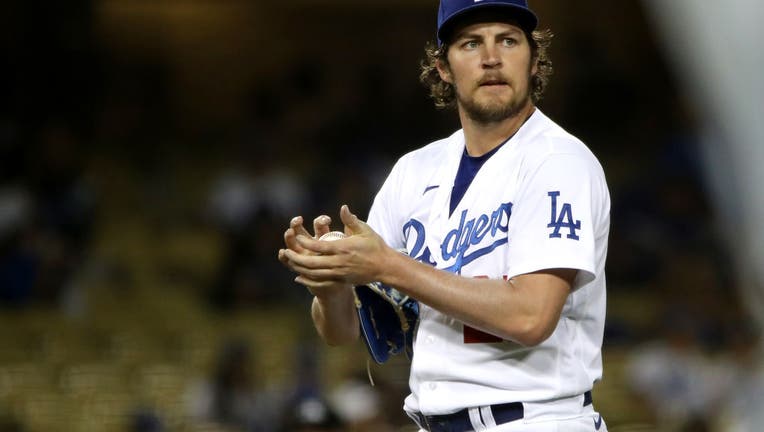 LOS ANGELES, CALIFORNIA - JUNE 12: Trevor Bauer #27 of the Los Angeles Dodgers looks on after giving up a hit to Joey Gallo #13 of the Texas Rangers during the fifth inning at Dodger Stadium on June 12, 2021 in Los Angeles, California. (Photo by Kate

LOS ANGELES - A woman wrapped her own hair around her neck as she sat on the witness stand to demonstrate the way she said Los Angeles Dodgers pitcher Trevor Bauer used it to choke her into unconsciousness.

"I couldn’t breathe. It almost felt like I was going to gag. I was gagging for air. Then I went unconscious," the woman said, crying through one of the more dramatic moments in more than three hours of testimony Monday. "It took me a while to remember who was even having sex with me, or where I was."

The 27-year-old San Diego woman is seeking a five-year restraining order against Bauer, who was placed on paid administrative leave on July 2 by Major League Baseball. That leave has been extended through Friday. MLB and police in Pasadena, California, are investigating the woman’s allegations, and Bauer could face punishment under baseball’s domestic violence policy.

The woman said she sought the protective order when she realized how long the police investigation was going to take. She was granted a temporary civil restraining order against Bauer until evidence could be heard for the five-year order she is now seeking.

Bauer’s representatives have repeatedly said everything that happened between him and the woman was consensual. He is expected to give his own version of events during the hearing, which is scheduled to last several days. The woman returns to the stand Tuesday morning.

Bauer’s attorney Shawn Holley said Monday the woman gave Bauer every indication she wanted to be choked in the way she described, and otherwise consented to rough sexual treatment during the two nights she and Bauer spent together at the pitcher’s home in Pasadena.

Holley read from private Instagram messages the woman sent Bauer in which she said she had "never been more turned on in my life" than when Bauer choked her out during their first encounter in April, and wanted more of the same when they got together again in May. Holley said during her opening statement that the woman told Bauer in the messages to give her "all the pain."

The woman testified that she in no way consented to how violent things got the second night when, as she was still reeling from being unconscious, Bauer punched her in the jaw, the cheekbones and the side of the head.

"I’ve never been punched in the face ever," she said. "I felt like my soul left my body, and I was terrified. I couldn’t fight back."

Bauer sat in the courtroom wearing a blue suit, and had no visible response to the testimony.

The woman’s attorney, Lisa Helfend Meyer, asked her repeatedly why she didn’t tell Bauer more clearly to stop when he was doing things she didn’t want.

"I wanted to create a better experience than the first time," she said. "I wanted to tell him what he wanted to hear, so he could stay interested. I wanted to keep his attention."

She testified that earlier in the night she had jokingly said "daddy issues" when he asked her safe word, and at the moment of maximum pain was able to get the word "daddy" out.

That made Bauer stop, she said, and tell her she was safe, and that he would never do such things to her other than sexually.

The woman said she still spent the night at Bauer’s house because she was not in a condition to drive home, and all her friends in Los Angeles were asleep.

After returning to San Diego the next day, she went to a hospital and underwent an exam used for sexual assault victims, and reported Bauer to authorities, according to her attorney.

The woman testified that she is the daughter of a baseball coach, has been a lifelong fan of the game, and roots for her hometown San Diego Padres. She said that was part of her banter with Bauer that began after she tagged him in an Instagram story while watching him pitch against the Padres in April.

"All that’s left is the official tryout," Bauer messaged her as their conversations got increasingly flirty before they met up, she said.

"Tryouts don’t scare me Bauer," she replied. "Bring it."

The Associated Press does not typically identify people who say they have been victims of sexual assault.

Bauer was the subject of another protective order sought by an Ohio woman last year who claimed he punched and choked her without consent while they were having sex, The Washington Post reported on Saturday. Bauer tweeted a statement calling the report "false" and "baseless."

Bauer agreed to a $102 million, three-year contract to join his hometown Dodgers earlier this year after winning his first Cy Young with the Cincinnati Reds last season. Bauer is 8-5 with a 2.59 ERA in 17 starts this season.