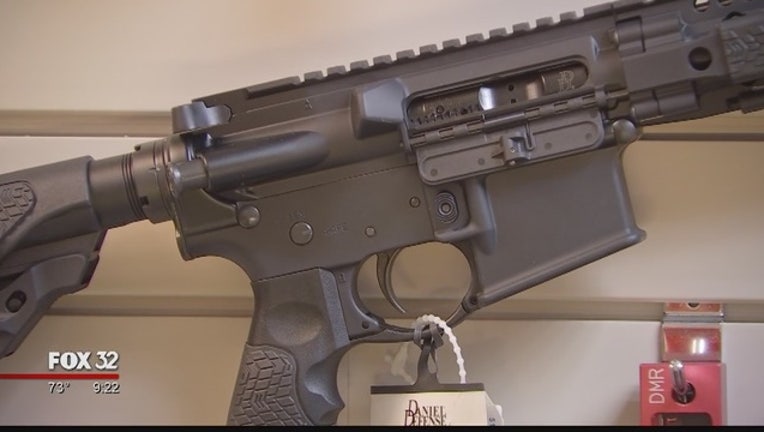 SPRINGFIELD, Ill. (AP) - The Illinois House on Thursday soundly rejected a ban on "bump stocks" like those the gunman used to speed up firing in this month's Las Vegas massacre, with many rural Democrats siding with Republicans in opposition to the proposed gun restriction.

State Rep. Martin Moylan's prohibition on "trigger modifications" got only 48 of the 71 votes it would have needed to pass. Fifty-four members of the Democratic-controlled House voted against it.

Before the vote, the Democrat from Des Plaines said his bill would save lives.

"It will reduce the destructive power of military assault-style weapons," Moylan said.

But opponents criticized the bill as too broad, saying it deals with two separate issues. Bump stocks increase firepower, but not by modifying the trigger. They use inertia from the rifle's recoil to allow quicker trigger suppression.

Moylan's bill defined trigger modification as any after-market alteration "intended to accelerate the rate of fire of a firearm," which critics complained is virtually universal.

"Every trigger in every competitive shoot is somehow modified," said state Rep. Jerry Costello II, a Smithton Democrat whose district includes the World Shooting and Recreation Complex . Contests at the site in Sparta, which is 50 miles (80 kilometers) southeast of St. Louis, have a $24 million annual economic impact on the region.

Arguments fell along the well-worn geographic line that often divides gun debates in Illinois, pitting Democrats from Chicago and other urban areas faced with street violence against lawmakers from more rural areas, particularly in southern Illinois, where Democrats and Republicans often see eye-to-eye on gun rights.

"You're turning law-abiding citizens into criminals," said state Rep. C.D. Davidsmeyer, a Jacksonville Republican. "Things they currently own are going to be illegal."

The Las Vegas shooter, Stephen Paddock, had 23 guns, including a dozen fitted with bump stocks, when he opened fire on an outdoor concert from his 32nd-floor hotel room. Fifty-eight people were killed and hundreds more were wounded.

Just one other state has responded since then. In Massachusetts, the Legislature is preparing to send a bump stock ban to the governor, who is expected to sign it. California already bans bump stocks, according to the Brady Campaign to Prevent Gun Violence , and 12 other states and Washington, D.C., have various prohibitions on rapid-fire devices or weapons.

In other matters, the House also approved a resolution Thursday commissioning a state audit of a $94 million contract for an electronic insurance platform critics say sidestepped normal procedures.

State Rep. Al Riley, an Olympia Fields Democrat, authored the resolution for the Auditor General to review the Republican Gov. Bruce Rauner's administration's contract with Morneau Shepell, an Atlanta-based company that was the only bidder on 10-year contract to create an online portal for state employee and retiree insurance benefits.

The Associated Press reported in June that the Department of Central Management Services request for proposals lasted just three weeks - short for such a big project - and Morneau's bid was just one-third of the department's $300 million estimate. The department also waived requirements for Morneau to follow state law in ensuring efforts to include minority- and women-owned companies in the work.

Department spokesman Rich Bossert said the agency supports "any review into the integrity of our procurement process."

Contact Political Writer John O'Connor at https://twitter.com/apoconnor . His work can be found at https://apnews.com/search/john%20o'connor . And sign up for the AP's weekly newsletter showcasing our best reporting from the Midwest and Texas at http://apne.ws/2u1RMfv .

This story has been corrected to reflect that Sparta is southeast of St. Louis, not north.