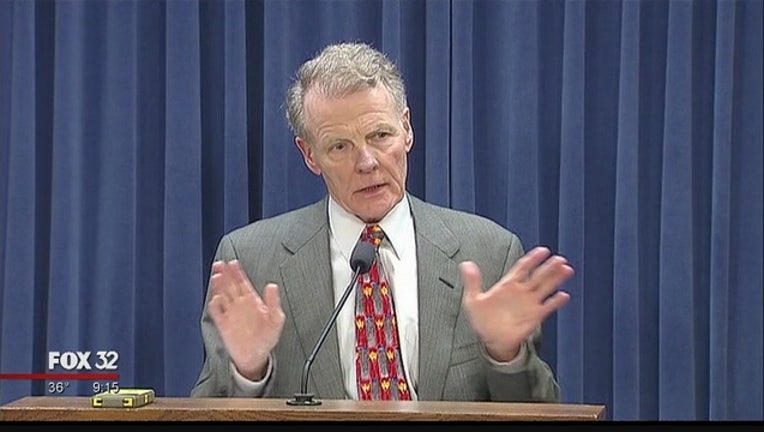 The allegations against Franks date back to 2016, and Madigan said his actions were designed to protect an employee of the speaker’s office.

"We were proceeding under the usual rules of these matters, which is number one, to provide, to protect the welfare and privacy of the victim,” Madigan said. ``And then, at the appropriate time, we notified law enforcement.”

Madigan’s office on Friday revealed Illinois State Police executed a search warrant at his state Capitol offices last Wednesday as part of an investigation into sexual misconduct, stalking and other allegations against Franks. The Chicago Sun-Times learned of the warrant in a Freedom of Information Act request.

In a filing with the Sangamon County Circuit Court, State’s Attorney Dan Wright wrote the search warrant seeking evidence into Frank’s misconduct should not have been disclosed. A paragraph in the warrant signed by Judge John Madonia says the issuance and execution of the warrant ``shall not be disclosed” because it could impede the investigation being conducted.

In its statement Friday, Madigan’s office said it received an initial complaint in November 2018 about alleged sexual harassment by a former state representative, investigated and found the complaint credible. Madigan's office said appropriate law enforcement agencies were informed the following year. Some have questioned why the investigation wasn’t made public earlier.

Madigan initially imposed restrictions on Franks, including prohibiting him from any contact with employees in the speaker’s office. Madigan later asked Capitol Police to ban Franks from entering the Capitol without an escort.

Franks told the Sun-Times last week he issued a ``full denial” of the alleged misconduct to the speaker’s office.

“Since then, I’ve heard nothing from the speaker’s office about the matter, and I know nothing about a search warrant,” Franks said. ``I haven’t been contacted about anyone about any matter, other than that letter nine months ago.”

Franks, a Democrat from Marengo, served in the Illinois House from 1999 to 2017. He is currently chairman of the McHenry County Board. Franks hasn’t been charged with any wrongdoing.