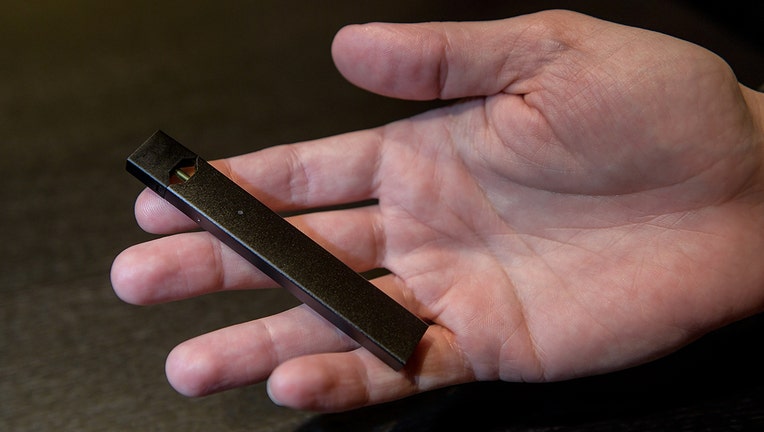 A man holds a Juul e-cigarette in his hand. (Photo by Axel Heimken/picture alliance via Getty Images)

CHICAGO - Illinois has become the latest state to sue the country's biggest e-cigarette maker, alleging in a lawsuit filed Thursday that Juul Labs Inc., used deceptive marketing practices to entice minors and misrepresented the amount of nicotine in its products.

“This lawsuit is one part of what must be a multi-faceted approach to addressing epidemic levels of e-cigarette use," Raoul said at a Chicago news conference, adding his office would also consider policy changes and enforcement.

The lawsuits come as health officials have been investigating deaths and illnesses tied to some vaping products. In Illinois, there have been five deaths and roughly 200 cases of vaping-related illness, according to the state's Department of Public Health.

The Illinois lawsuit alleged Juul used a “substandard age-verification system” in its online store to make it easier for teens to buy the products and created a product with a much higher nicotine content than had been previously seen in e-cigarettes, something it downplayed. The complaint also contended that once the company faced backlash it focused on another demographic: smokers looking to quit cigarettes.

The lawsuit, filed in Cook County, seeks a civil penalty of $50,000 per deceptive or unfair act, among other things. A Raoul spokeswoman didn't immediately have an overall dollar estimate.

Earlier this year , the company halted all broadcast, print and digital product advertising in the U.S. amid wide backlash against vaping.

“Our customer base is the world’s 1 billion adult smokers and we do not intend to attract underage users,'' Finan said in a statement.