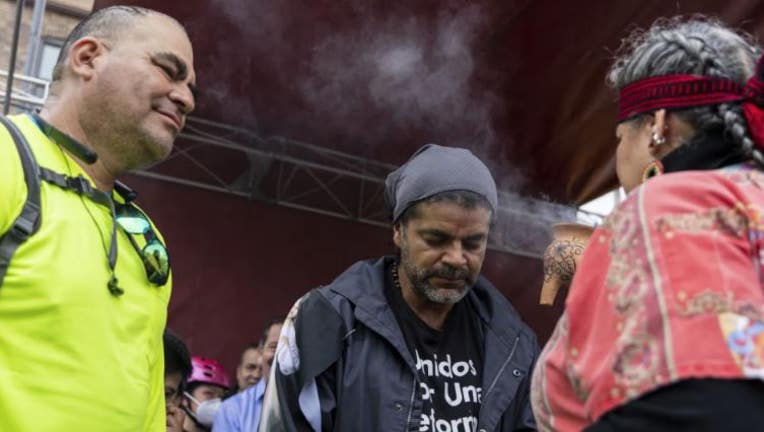 Homero Ocon and Omar Gomez are blessed during a rally to welcome the two men, who are immigration activists in the middle of a 40-day bike ride from Colorado to Washington D.C. | Anthony Vazquez/Sun-Times

CHICAGO - "What do we want?" Pastor Emma Lozano of Lincoln United Methodist Church asked in Spanish to a small crowd in Chicago’s Little Village neighborhood Wednesday. "Justice!" they chanted back. "And when?" Lozano asked. "Now!" they answered.

The crowd gathered on 26th Street between Troy Street and Albany Avenue, to welcome Omar Gomez and Homero Ocon, immigration activists with United for Immigration Reform Colorado, who arrived in Chicago on the 24th day of a 40-day bicycle ride from Colorado to Washington, D.C.

The trek is expected to last through May 1, according to the Sun-Times.

They’re biking for immigration reform, and calling for an end to deportations. They hope to pressure federal officials to make changes prior to November’s midterm elections.

So far, Gomez has biked 1,106 miles, accompanied for much of that by Ocon, who has taken a few days off. They’ve been joined by other bikers on some legs of the journey, too.

It’s been grueling for Gomez. "Every day, I stand up, and my body sometimes don’t want to go on the bike," Gomez said — but, "I don’t have a choice," he added.

The activist cyclists from Colorado were welcomed by a group of local leaders including U.S. Rep. Jesus "Chuy" Garcia.

"I know that so many families here and around the country are still living in fear of deportation," Rivera said. "Many others have already lost a loved one to deportation, the trauma and grief these families deal with is not only unjust. It is inhumane."

Mahalea Velasco, 16, experienced that trauma personally 11 years ago at age 5, she said. Her father was driving with an expired license plate when he was stopped by a police officer in Chicago. He had no papers, and was deported within 24 hours, Velasco said.

"It’s been a real struggle," she said. "I never really got to have that experience with my father, so everyday things like going to the store, going to the park, it’s something I missed out on."

Velasco said she has been working to get her father back since the day he was deported, joining the anti-deportation group Right 2 Family.

"I wouldn’t even wish this on my worst enemy, dealing with deportation," Velasco said.

Many immigrants are forced from their homes due to war, violence or other disasters, Little Village Community Council president Baltazar Enriquez said. "We don’t want to break the law," he said, but many have no choice but to flee dangerous situations.

And they are tired of being disrespected, Enriquez said.

"We’re the ones that pick your fruit, pick your vegetables. We’re the ones who clean your bedrooms in the hotels. We do that for you. We put food on the table," Enriquez said. "So please, give us some respect as human beings."