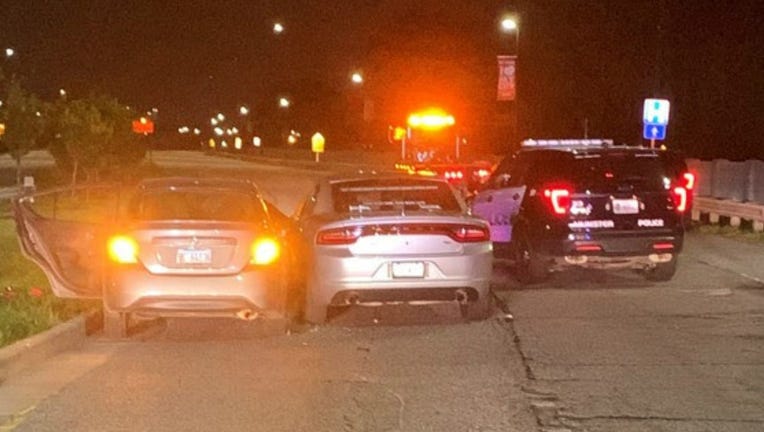 EAST CHICAGO, Ind. - An Indiana State Police trooper shot a man who allegedly hit him with a vehicle after a chase Tuesday on Interstate 80 in northwest Indiana.

The pursuit began at 12:27 a.m. when Munster police saw a silver Nissan sedan “which had reportedly been involved in suspicious activity at a residence in their town,” according to a statement from state police. The car took off at a high speed with its headlights off and reportedly tried to ram a Munster police car before heading east on I-80 from Kennedy Avenue.

State troopers joined the pursuit on the expressway and followed the car as it exited onto Cline Avenue and crashed into a roundabout on Columbus Drive, authorities said. The Nissan tried to continue west on Columbus before stopping in the left lane.

A trooper pulled next to the Nissan and got out of his squad car to try to take the driver into custody, according to state police. The car moved forward, hitting the trooper and wedging him against the squad car.

While wedged between the vehicles, the trooper shot the 30-year-old Crown Point man through the windshield, state police said. The driver and the trooper were both taken to hospitals with injuries that were not thought to be life-threatening. Three passengers in the Nissan were not injured.

The man was taken to the Lake County Jail on a probable cause hold for the chase and crash, according to state police. He was also wanted on outstanding warrants from Marion and Porter counties.

The trooper, who has been with Indiana State Police for four and a half years, has been placed on administrative duties while the shooting remains under investigation, state police said.